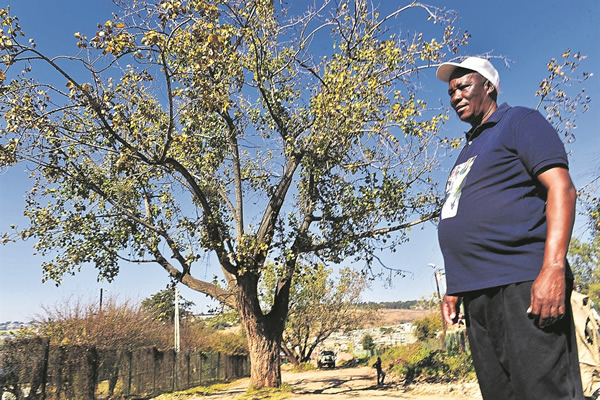 THEY climb onto the big tree to hide in the branches. When they see targets coming, they get ready to jump. They then drop onto their victims and rob them of their belongings at gun or knife-point, or even kill them.

An unknown man was killed last Saturday in Zandspruit, Honeydew in Joburg, and was found lying under the tree with stab wounds.

Community leader Kenneth Lekalakala said this was not the first person to die there. He said a man was found dead in January, and in February another was killed.

“A number of victims were robbed but not killed. We have been trying to speak to the municipality to have big trees cut, but our pleas fall on deaf ears.”

Zandspruit residents are now appealing to the government to cut down the trees.

“This is the only route to use to get in and out of the squatter camp,” they said.

July Vilakazi (36) said he dreads going past the tree after 6pm. “I make sure my family and I are all at home at that time. I was pointed at with a knife for my cellphone while passing under that tree.

“I had to beg for my life and that is when I stopped passing there at night.”

July said he was coming from work when two thugs dropped out of the tree.

“It is dark as there are no lights, so these thugs take advantage,” he said.

Sibusiso Masango lost his brother, Vusi, early this year.Vusi was found dead, his legs tied, after he had been killed not far from the trees.

“Why did they not take whatever they wanted and rather leave him alone?”

Jenny Moodley of City Parks said she would send her team there this week.