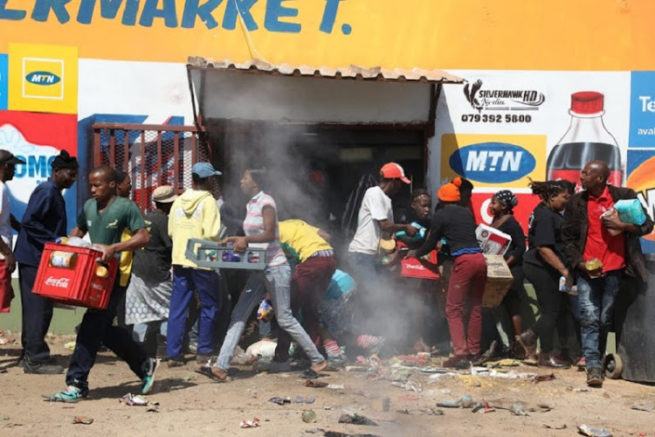 It also wants foreigners to close their businesses and leave South Africa within 90 days to give the country a chance to solve its internal problems.

In a document tabled before the ANC national working committee (NWC), the party’s operational arm, the group said the governing party’s leadership under President Cyril Ramaphosa must make way for a national task team (NTT) because it suffered from a legitimacy crisis and was controlled by “their invisible masters”.


The document, titled “ANC TURNAROUND STRATEGY 2025: CHANGING THE COURSE OF HISTORY”, was discussed at several meetings between the group and the ANC national leadership over the past few weeks.

Its release comes weeks after the Gauteng government tabled a draft bill which aimed to ban foreigners from operating businesses in the townships.

Mantashe said the ANC, in principle, had no problem with the ANC cadres’ broad analysis of the balance of forces globally and domestically even though they were “superficial”.

However, many of the analyses of the ANC cadres were not scientific but were formed on the basis of “views and opinions of individuals”.

Mantashe added that the group released the document “to cause confusion in society”.

Sources who attended the meeting last week said they told ANC national executive committee (NEC) members that they had to deal with immigration and kick out regional and international illegal foreign nationals as they were being used to marginalise South Africans and make them disgruntled with the governing party.

This was because “those who have an agenda” preferred to employ foreigners over locals in the restaurant, banks, engineering and construction sectors to set Africans against each other.

“We need to be given an opportunity to deal with our problems. The problem is between us and those who want to punish Africans for having challenged their power in the state. When we started, they told people to go and tell Mandela to give them jobs.

“One young man came to us and said, look, ‘I went to a company in Silverton which advertised posts. The first thing they asked me was I a foreigner or a South African. I thought they wanted a South African and responded with pride. They then said, sorry, we don’t employ South Africans’,” said a member of the ANC cadres delegation.

“So when we ask for an opportunity it’s because they don’t understand what we are trying to sort out. We want to ensure that you don’t have a business if you don’t want to employ your own people, who are citizens.

“We don’t want them to be victims of our own family feud. It’s a sacrifice they would have to make. They want to blame our people and say they are xenophobic.”

“If they want to talk about regulation, taking action against criminality and so on let’s do it where the real crime is. We obviously have to create employment for our people but we are not in favour of xenophobic attitude. That’s xenophobic attitude.

“I am sorry. The issue is for the government to do what is necessary to enable business to lead economic growth. We need economic growth, and with economic growth we create employment and we also utilise appropriate skills that might be coming into the country for the growth of our country and the benefit of all our people.

“That’s what we should be thinking about. Not this whole nonsense,” said Coovadia.

Lobby group African Diaspora Forum spokesperson Amir Sheikh warned the governing party against “adopting a knee-jerk reaction” to sentiments in the country, adding that it was “a myth” that migrants stole local jobs.

“We would like to engage with the ANC. One of the things we would like to say to them, is that it’s a myth that migrants lead to job losses in South Africa. There is empirical evidence presented by the OECD (Organisation for Economic Co-operation and Development) and the World Bank, among others, that migrants are contributing positively to the economy of the country. South Africa’s high unemployment rate is related to the structure of the economy that even predates 1994. You still have the wealth of the country in the hands of the few,” Sheikh said.

“We don’t want to present ourselves as victims but it is easy to scapegoat migrants because there is sentiment among South Africans. People blame immigrants for some of the problems. But the ANC must not adopt a kneejerk reaction.”

The document also contained a programme of action aimed at decolonising the state and intervening to alter the economic and social plight of Africans.

“This means that not only have you survived perhaps one of the most tumultuous years in recent history, you have been able to thrive thanks to the availability of internet access and digital tools that are paving the way for our completely connected future way of life,” he said.

According to Minister of Basic Education, Angie Motshekga, with 1 058 699 candidates, the combined 2020 examinations is the largest public examination run in South Africa.

In a social media post, Motshekga, said while Grade 12s will be writing their exams under unusual circumstances as the schooling systems across the globe were disrupted due to Covid-19, they must remain focused because all has been done to ensure safety in the exam centres.

“I know you can make it. Good luck,” Motshekga said.

The 2020 National Senior Certificate final exams began on November 5 with learners writing English as their first paper. The exams end on December 15.