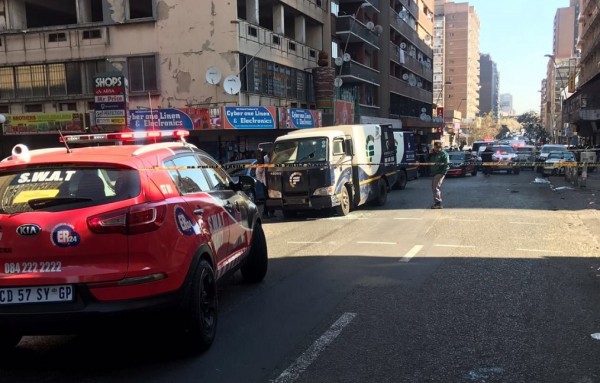 The Acting National Commissioner of Police, Lieutenant General Sindile Mfazi, has expressed his dismay at the killing of one police officer after a Thursday afternoon heist in Hillbrow.

Forensic investigations at the crime scenes continue after six suspects were arrested, two of whom wounded in the shootout.

The robbery took place at around 1pm.

A number of unknown suspects attacked and fired shots at a parked CIT vehicle and fled the scene in vehicles with an undisclosed amount of money. As a result of the attack and the shooting, two security guards and two bystanders were wounded.

The suspects started firing shots at the police and police responded.

As investigations continue, police have so far recovered seven firearms, including rifles and pistols. Three motor vehicles have also been seized.

“Our members are fearless, they did not think twice before they confronted those brazen criminals. One of our own laid down his life to ensure the safety and security of the inhabitants of this country. With the Police’s 72 Hour Reaction Plan activated, specialised dedicated teams are currently combing the scenes and have already made arrests and seized exhibits,” said Mfazi.

#sapsHQ Suspects arrested, police member fatally wounded following attack on cash van in Hillbrow. Acting PC, Lt Gen Mfazi, has expressed his dismay at the killing of one of our own in blue in a shoot-out with armed #CIT robbery suspects earlier today. MEhttps://t.co/0qfZwvjmgv pic.twitter.com/faA59AyUyv

Police Management will be visiting the family of the police officer to convey condolences and offer the necessary support in this time of mourning.

CIT heist minutes ago in Hillbrow.20 minutes no police on scene. pic.twitter.com/9M12kGR0Hk

Another #CIT in Hillbrow happened few seconds Ago pic.twitter.com/yHz5Zf8ao0