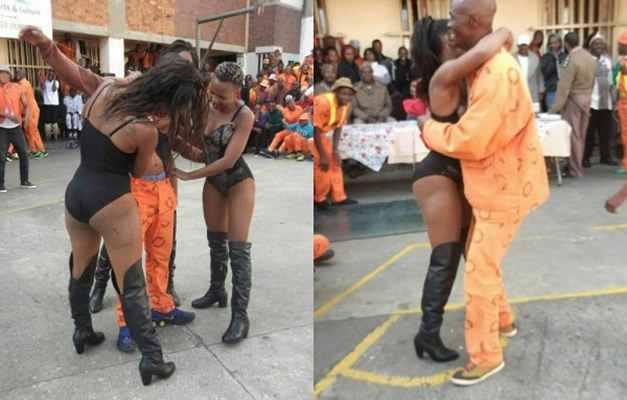 IN PRISON, inmates are supposed to be taking part in skills development programmes as part of their rehabilitation.

But it appears some inmates at Joburg prison, better known as Sun City, in Naturena, south of Joburg, are focusing on other skills.

Last year, inmates at Medium B section of the prison, enjoyed the attention of sexy strippers – some even danced with them.

Now, a video footage of a female inmate stripping at Sun City, has gone viral.

The video was circulated on WhatsApp last week and it shows the inmate giving a full strip show.

She was recorded by her cellmate with Joe Thomas's song playing in the background.

She is seen taking off her top, touching her breasts before removing all her clothes.

She then performs sexual acts, including licking her breasts.

Department of Correctional Services spokesman Singabakho Nxumalo confirmed to Sowetan that the inmates were indeed from the Joburg prison.

Nxumalo told the publication that the department was "totally dismayed" by the incident.

"This matter was only brought to the attention of the department yesterday (Monday) and immediately an investigation was carried out."

Nxumalo said the investigation confirmed that the video was taken some time last year.

"It is believed that the prisoner allegedly smuggled the cellphone inside the prison since handsets are banned in prison.

"This incident has exposed the dangers of having cellphones inside prisons.

"It is a criminal offence to smuggle a cellphone inside correctional centres and all that are involved will be facing intense disciplinary processes," Nxumalo said. He also apologised to the public for the incident.

"This type of conduct by inmates is unacceptable; we wish to apologise to the public and all those who have been exposed to the video footage," Nxumalo told the publication.