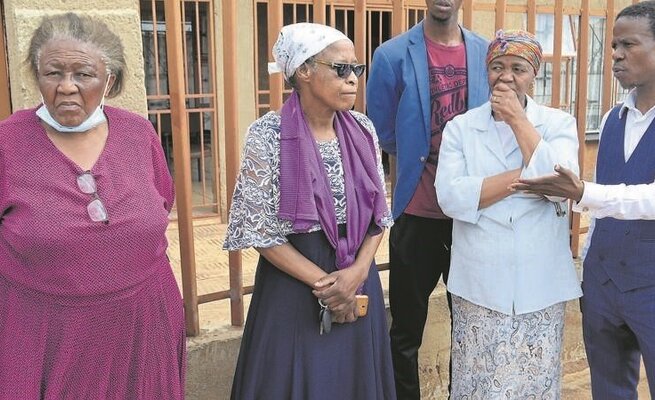 ALL the gogos wanted was to make a little extra cash.

But when they invested in a scheme linked to Prophet Shepherd Bushiri, they didn't know it would be this hard to get their bucks back.

However, they don't blame her for losing their money.

They just want the truth about what happened to it.

Gogo Mapule said the money was invested in Undercover Billionaires, which was owned by Louis Tshakoane Jnr, who ran the scheme with his father, former Kaizer Chiefs spokesman Louis Tshakoane

"I did not take people's money. They deposited it into Undercover Billionaires" investment account," she said.

She said all she did was write the names of those who came back with slips.

Gogo Mapule agreed that people were promised huge returns, depending on how much they invested.

She said she invested R500 in 2017, but has still not received any interest.

She said Undercover Billionaires held meetings in Sandton, but when people demanded their money back, Louis Jnr took them to Pretoria.

"I didn't go to Pretoria, but my daughter Portia Mzizi (50), who invested R65 000, went. Louis told them they were going there to get answers about their money, but that did not happen," said gogo Mapule.

"Though we did not see him, Louis kept consulting and when responding he would say "papa said",said Portia.

That's when we realised that papa was Bushiri and he was the big fish in this. Louis was just an agent.

Portia said the R65 000 she invested belonged to her and her cousin.

"We had a business and saw an opportunity to raise more money in a short period of time. We took a chance, but it backfired," she said.

She said their business died, their car was taken by the bank and they lost everything.

"We regret ever investing in this," she said.

In a video of an ECG church service, Louis can be seen receiving blessings from Bushiri.

During the service, Bushiri said witchcraft surrounded Louis, but grace was coming upon him."I receive, I receive," replied Louis.

The gogos have since approached Prophet Paseka 'Mboro' Motsoeneng for help.

Mboro said to his surprise, trusted members of his church, Incredible Happenings Ministries, told him they had also invested in a scheme connected to Bushiri.

"As president of Church Mandate Turn Around Movement, my duty is to defend, help and speak for anyone who needs my help.

He said the movement noted the summons from Bushiri's legal team.

A letter of demand sent to 'Daily Sun' states in part:"Our client was not behind the scheme but was merely an investor.'Notwithstanding that the Prophet is not the mastermind behind such investment scheme, he has since taken full responsibility to pay back purported investors."

Louis could not be reached for comment. ECG Church,had not responded at the time of going to print.