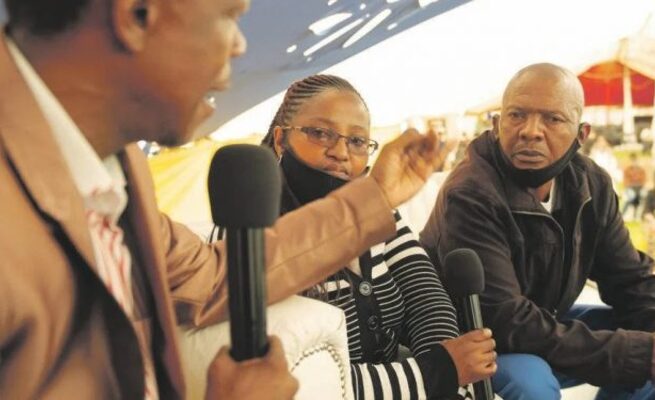 Prophet Paseka “Mboro” Motsoeneng, has come to the rescue of a family that invested R130 000 in Prophet Shepherd Bushiri’s gold forex and commodities scheme in July 2017 and never got a cent back.

Felicia Sibeko (46) from Westonaria, west of Joburg, said she had no food and relied on handouts.

The 46-year-old said she heard about the scheme when she visited the Enlightened Christian Gathering Church at Tshwane Showgrounds in 2017 and decided to invest in it.

However, she now regrets that decision as her family was left poor.

Felicia said she sold her Toyota Quantum for R130 000 in July 2017, so that she could invest in the scheme.

She claimed they were told they would be more than R1 million richer after six months.

She said Prophet Mboro brought two trolleys with groceries for her family.

“I can’t believe we have so much food,” she said. “Mboro filled two trolleys with groceries for us. He’s a true man of God. He bought us everything we needed and still wanted to buy us more. My fridge is full. I’m so grateful.”

Felicia lives with her husband, Author (54), and two sons. Their daughter lived in Tshwane.

She revealed many people who saw Mboro when he bought the groceries wanted him to pray for them.

“People are asking me to tell Mboro to open a branch in this area,” she said.

He said he never expected groceries from Prophet Mboro when they visited Incredible Happenings Ministries in Katlehong on Sunday.

When asked why he had assisted the family, Prophet Mboro said he couldn’t ignore hungry people.

“We make sure we support them and give them hope and courage,” he said.

“I’m the father and defender of the weak, widows and the orphans. This is my responsibility as a prophet,” he said.