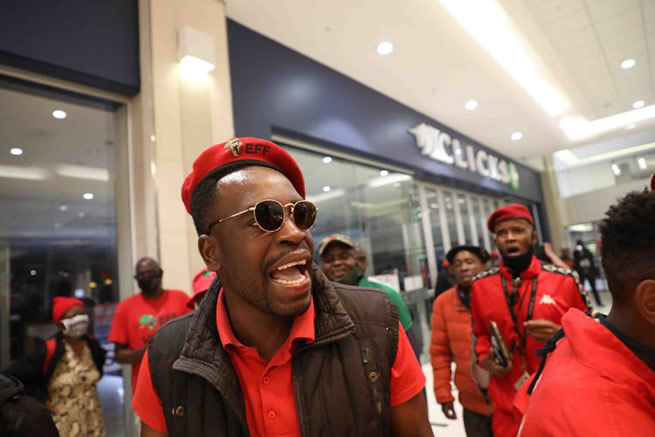 Clicks customers were forced to shop at other health and beauty retailers yesterday due to Economic Freedom Fighters (EFF) protesters blocking entrances to stores.

Faith Sithole visited the Clicks Sandton City branch to buy her necessities and did not understand what the whole commotion was about.

“To my surprise, the store was closed. I don’t know where I will get my prescription today,” said Sithole.

EFF deputy president Floyd Shivambu said the party would not stop protesting until Clicks revealed the names of those responsible for the controversial advertising campaign that sparked the demonstrations.

He said the party had a constitutional right to protest without permission, even if they had not gained permission.

“We don’t give any consideration to what the lawyers at Werksmans are doing. They tried to go to court. There is no one who is going to stop us protesting. Werksmans and Clicks must go to hell with their lawyers, with everything,” Shivambu said,

“There is no security who will stop us from protesting.”

The Citizen visited a different Clicks branch at the Lemon Tree shopping centre in Alberton and found the store vandalised.

Tshepo Shabalala, a frequent customer at this Clicks store, said the reaction to the advertising campaign was over the top.

“I don’t think issues should be resolved in this way. I think the lockdown is to blame for everyone’s frustrations and their reactions towards such issues.

“The vandalism to this store paints a bad picture of the black community,” he said.

Andrew Whitfield, Democratic Alliance (DA) police spokesman, said in a statement the DA would be laying charges of incitement to violence and destruction of property against the EFF and its leadership.

“We recognise the upset and anger the Clicks advert has caused to many South Africans.

“However, the EFF’s violent response is unacceptable and the SA Police Service has a duty to act against Julius Malema and others who have made explicit statements inciting EFF members to commit criminal acts,” he said.

“While we support the campaign to discipline white capital and eradicate systemic racism that continues to treat black people as second-class citizens, we condemn the violence and thuggery that has seen some stores firebombed,” said Cosatu.