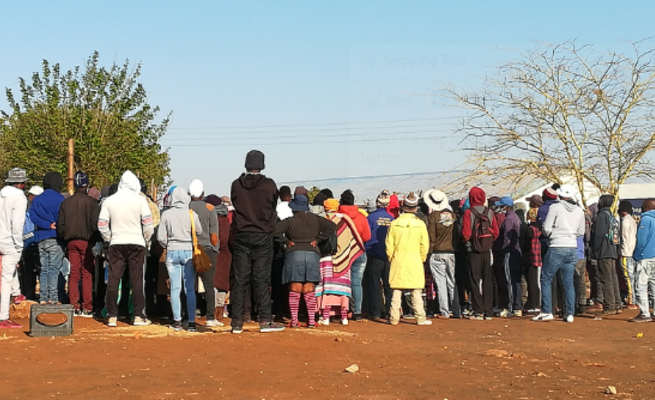 Marikana residents in the North West have vowed to recreate another Marikana 2012 scene after their R350 social relief grants were not paid.

The frustrated community including surrounding areas have threatened to burn down the post office where their grants are paid out.

They angry group said they were told there is no money at the post office.

Many come from as far as Brits to collect their grants but nothing.

They have blankets and spots of fire areas are visible where they keep warm.

Angry resident from Marikana RDP Sibongile Masina (50) said she has been going to the post office since 13 July. She does not know what is happening but has not received her social relief grant.

"I live with my two children and two grand children, I need this money. I've been spending money everyday to come here. But we are told there is no money."

For two weeks the response has been the same and no one has come to us to explain what is happening," said Sibongile.

A lady in the angry group said she spends R30 each day and for the past week she has spent more than the R350 grant.

She added that the department needs to be more interactive instead of making the needy and elderly look stupid.

&South African Social Security Agency Spokeswoman Nthabiseng Mosieleng said, "The agency is experiencing high Covid-19 relief fund applications and verification of applications dependent&nbsp; on third parties. Though we understand the impact of lockdown we call on our communities to exercise patience as the agency address the delay of payments."