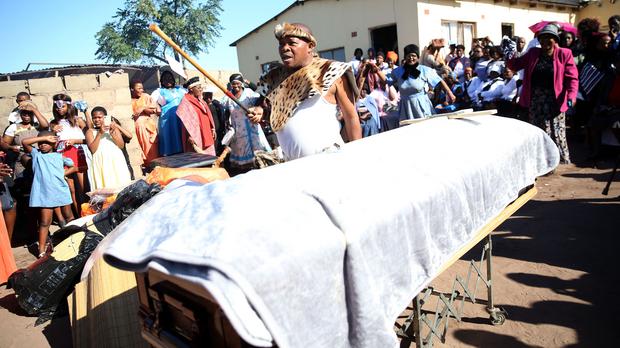 JABULANI Dlungwane, 51, of Osindisweni township just outside Verulam in KwaZulu-Natal province, wed his sweetheart, Sindisiwe Khumalo, last weekend. But this wedding was different, almost unthinkable, because Khumalo was dead, having succumbed to diabetes a week earlier.

“Even death could not hold us apart,” Dlungwane told Independent Media on Thursday.

Instead of burying his fiancée, Dlungwane kept his promise and married her coffin in a traditional wedding ceremony attended by Osindisweni community members.

“I was honouring her wish,” said Dlungwane, who described his relationship with Khumalo as “blossoming”.

A jovial mood prevailed among the guests at Dlungwane’s house during the unorthodox wedding with a coffin.

Khumalo was buried later that day.

During the wedding, Dlungwane was clad in his traditional attire made of cowhide (ibheshu).

He stood next to the coffin where Khumalo’s body lay while relatives ululated and danced around the coffin as some stunned members of the community looked on.

Dlungwane made his traditional dance near the coffin, which was wrapped in a blanket.

Dlungwane said: “We had already decided on the date of the wedding, but unfortunately my wife died before our wedding, which was set to happen in the next two weeks. I had to honour her even in death. I loved her with all my heart.”

Dlungwane said he overcame the odds that were stacked against him and his fiancée, including her illness. Because of her diabetes her leg had to be amputated before her death.

“But nothing deters me from giving her the love that she deserves,” he said.

Dlungwane said he had faced a barrage of criticism from people who were against what he did, but he was not shaken.

“I have been blamed for marrying my wife when she was dead but I don’t care. I did what I wanted to do and I’m happy and I know she is happy wherever she is,” he said.

In 2014, a dead Indian guru, Ashutosh Maharaj, was placed in a deep freezer in his ashram for nearly six weeks, with followers confident he would return to life to lead them. He never did.

Commenting on the practice, Inkosi Phathisizwe Chiliza, the chairperson of the house of traditional leaders who is well versed in traditional matters, expressed concerns about how Dlungwane had handled the process.

He said the practice of marrying the dead was done in isiZulu culture, but the ceremony was not meant to be a public spectacle but a private matter confined to the family.

“It is done, but not in the way he did it,” explained Chiliza. “He was supposed to perform this privately with the family of his wife and later bury her with dignity. It defies our tradition when people ululate at a funeral. It is not supposed to be.”

A neighbour who attended the wedding-cum-funeral, Bhekinkosi Chiliza, 55, said he had never experienced anything like this before.

“It was my first time to see such a wedding. I’m now approaching my 60s but I have never seen something like this. I’m baffled to say the least,” he said. “People are free to do things in whatever way they want to do them. I’m not God, I cannot be pointing fingers.”

He said he was one of the many guests who feasted on the slaughtered cow meat and drank traditional beer during the event.

Another neighbour, Joseph Mthalane, 49, said it was a marvel to attend the ceremony.

“I’m happy for him and you see that he is also happy for what he has done. I commend him for being brave because we don’t know what they discussed with his wife before she died,” said Mthalane.

Mthalane said his friendship with Dlungwane spanned decades. Dlungwane said he would mourn his wife before deciding whether to wed again.