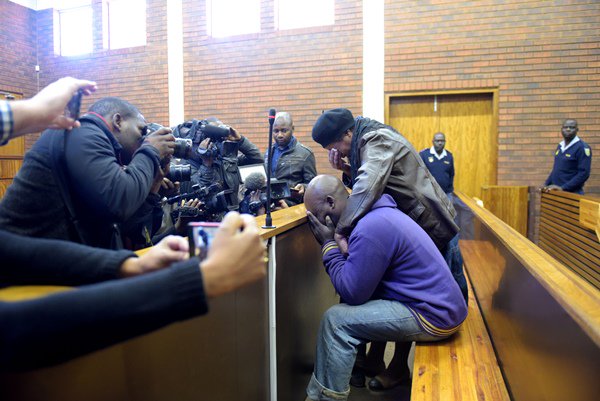 Sibusiso Emanuel Tshabalala was so heartbroken after accidentally shooting dead his teenage son in Ennerdale, south of Johannesburg, this week that he wanted to take his own life.

Tshabalala broke down at 16-year-old Luyanda’s funeral in Olifantsfontein cemetery yesterday and had to be supported by family members. Siphiwe Khalishwayo, 42, Luyanda’s mother, on Friday said she did not blame her husband, who shot Luyanda after mistaking him for a criminal.

“He’s suffering. He wanted to take his own life. I had to be strong for him. We had to talk through this, telling him about his other young children. If he died, who would protect them?” Khalishwayo said.

At Luyanda’s funeral, Khalishwayo was too distraught to speak. Her message was read by Luyanda’s friend, Lesego Mohape: “I am grateful for the life we’ve shared. You told me that you will one day become wellknown and famous. Did you mean this [his death]?

“You were an extraordinary person, so perfect and the heavens could not wait to welcome such a soul. No parents should endure this.”

The shooting happened on Tuesday evening when Tshabalala was waiting for his son to finish extra classes. He fell asleep in his car and was startled when his son knocked on the window. He fired a shot at what he thought was a hijacker.

The incident also ignited the debate about gun control in the week that the Constitutional Court handed down a judgment that means about 400 000 gun owners must give up their firearms.

Khalishwayo said her son had been a brilliant child, at school and at home.

“Luyanda was my second-born child. This was a child who would wake up and make sure he cleaned my house and cooked for me when he visited me. I was looking forward to seeing what my child would be in the future. He excelled academically. I am hurt, but I don’t blame anyone for this. God knows why [it happened],” she said.

Pupils, teachers and community members attended a memorial service for Luyanda held at the Fred Norman Secondary School in Ennerdale on Friday. Speakers, including his friends, spoke of his intelligence and his once bright future. He had wanted to become a chartered accountant.

Khalishwayo was supported by mourners. He’s not taking this easy, he’s suffering. He wanted to take his own life, he wanted to commit suicide.

“My boy, why? My boy, why now, why did you leave me . . . why now?” she wept, as family members consoled her. His father did not attend the memorial service.

School principal Mike Davy told her: “Your loss is our loss.” Luyanda had achieved so much in his short life, he said.

Davy said Luyanda had won many awards at school and was often among the top 10 academic achievers in his class. Luyanda was deputy chairman of the representative council of pupils at the school. Mohape said he would miss Luyanda’s strong personality. “I lost a friend, we lost a brother. He’s no longer our friend now but a spiritual brother.”

Tshabalala appeared in court on Thursday and was released on a warning so he could bury his son. At the funeral, Tshabalala broke down at the cemetery, and family helped him to a car.

On Thursday, the Constitutional Court upheld an appeal by the minister of safety and security and dismissed a high court order which had declared that two sections of the Firearms Control Act of 2000 were constitutionally invalid. The sections of the act concerned the expiration and renewal of firearm licences.

The implication of the ruling is that gun owners who had not applied in time to renew their licences were now illegal firearm owners and needed to hand over their guns to the police.

Guy Lamb, director of the Safety and Violence Initiative at the University of Cape Town, said more checks needed to be put in place before firearm licences were issued.

“It’s a personal choice to have a firearm, but once an accident has happened we can’t change that. Background checks, state of mind of the applicant, interviewing applicants before allowing them the licences is key. These . . . can help such incidents from happening as applications would be scrutinised,” said Lamb.