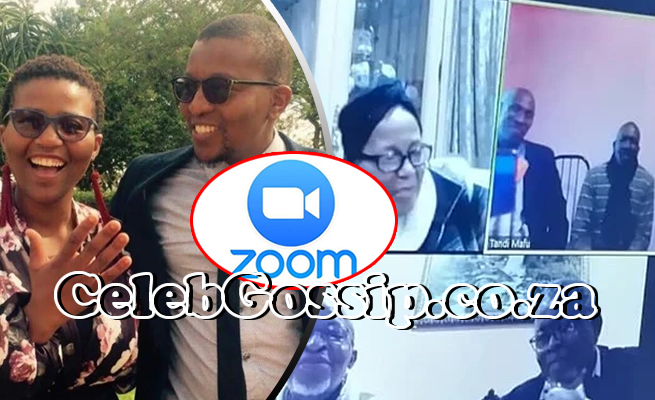 A young couple eager to cement their love did not let Covid-19 stand in their way when they held what may have been the first ever virtual lobola negotiation between two families.

Melusi Dlamini from Vryheid in KwaZuluNatal and his bride-to-be Thandile Mafu from Dutywa went viral on social media this week when pictures of the unconventional virtual lobola negotiations tugged at the heartstrings of many South Africans.

A payment equivalent to 11 heads of cattle was transferred via electronic fund transfer (EFT) within 45 minutes of the digital meeting.

The negotiations were transmitted live from bride-to-be Thandile Mafu's Dutywa home in the Eastern Cape and her soon-to-be husband Melusi Dlamini's home in Vryheid northern KwaZulu-Natal on Saturday.

The two lovebirds, who both work for major banks in Johannesburg, met at church in 2016 and became friends.

It is Dlamini who could not wait any longer in order to make things official between the two and initiated the tradition-defying Zoom negotiations.

He said he suggested the digital meeting because no one knows when the pandemic will subside.

"I was excited and a bit nervous about the idea of the virtual meeting. It was something I kind of suggested, taking into consideration the travel restrictions, because we are from two provinces and we are in the middle of a pandemic.

"I said maybe we can do the Zoom and, luckily for me, the family from my future wife's side actually agreed to that and I was very ecstatic about it."

Thandile said: "What I like about my husband-to-be is the fact that we were friends before. Friendship is the best way to learn a person because we talked about everything. I am excited and happy about getting married to him. He loves me very much and I love him."

Thandile said her future husband's fashion sense and passion for their relationship are what she appreciates most about him.

Although no date has been set for the big day, Dlamini said the wedding will be open to immediate family members only, while friends and distant relatives will get to watch it live on Facebook, YouTube and Zoom.

Due to the alcohol ban, which prohibits the sale and transportation of liquor, the Dlamini family could not give the bride's family the three bottles of brandy, which is mandatory in order to kickstart the negotiations.

"We don't drink in any case, so we didn't miss out," said Thandolwethu Mafu, brother of the bride.

"The negotiations started at 16:10 and, in less than 45 minutes, they had already transferred the lobola via EFT. I've been to many lobola negotiations and have never seen such a smooth arrangement. Everyone was happy."

He said the idea of the virtual meeting started as a joke.

"My sister informed me that Melusi wanted the two families to meet for lobola talks, but the problem is that we are on lockdown and gatherings are prohibited. I said to her we can't wait for Covid-19. What if he changes his mind or Covid-19 takes forever? Let's do the Zoom," said Thandolwethu.

A delegation of uncles from Thandile's family was assembled for the big day.

Thandile's father passed away in 1998, so one of the uncles stood in as a head negotiator.

Mafu said the idea had started off as a joke as they had not known how their parents would react to a Zoom negotiation.

“The idea came about because of the travel restrictions that have come with the national lockdown,” Mafu said.

“We didn’t know how our parents would react to the whole process but they were very receptive.

“I’m really happy with the outcome because it was cost-effective and the negotiations took less than an hour.

“As much as the parents had to sit down and discuss things, it went very swiftly,” she said.

“It saved time and it saved costs.”

Dlamini said his parents had been hesitant about the idea at first.

“Fortunately the bride’s family was receptive to the idea,” he said.

Thandolwethu said convincing the elders to agree to the idea was not as difficult as he anticipated.

"What worried us initially was the connection because we are in a rural area, but what worked to our advantage is the fact that we have a cellphone tower behind our house. The connection was smooth. Funny enough, after the negotiations, the following day, we lost connection."

Thandolwethu said during the friendly negotiations, both families would excuse themselves and switch off microphones and camera to discuss certain strategies among themselves.

He said a challenge was observing physical distancing because everyone had to sit close to be in the view of computer camera.

"But we made sure there was sanitiser and masks," he said.

He said the advantage of virtual negotiations was that it cut a lot of costs.

"Both families saved a tremendous amount of money because, under normal circumstances, the uncles of the groom would have had to travel from KZN to the Eastern Cape. We would have had to find them accommodation and offer them hospitality."

The bride-to-be said she was over the moon with the outcome of the negotiations, “even though I was nervous about the technical logistics of the virtual meeting at first”.

“I was nervous because at times we have load-shedding problems in my village.

“So with no electricity, the network would have been an issue and my family wouldn’t have been able to connect.

“But thank God everything went smoothly,” she said.

The bride’s brother, Thando, said Mafu and Dlamini’s virtual lobola negotiations were “something monumental and innovative” for the African culture. “This is something that has never been done before. What also sets this moment apart is that the mothers of the bride and groom were present on both sides.

That seldom happens in our culture, where women are involved in the negotiations,” Thando said.

“It truly was something so refreshing for both families and we are thankful that the parents and elders were receptive to the unconventional way of conducting these negotiations,” he said.

The groom’s family consisted of the father of the groom and the brother.

Dlamini said he was “very happy with the outcome. And I can’t wait to be with my future wife”.

Mafu said they would host an intimate virtual wedding.

“The immediate family will be at the venue, maintaining the lockdown regulations of social distancing. Other guests will watch on Zoom and on Facebook. We haven’t confirmed the date yet, but we are very excited about this next chapter in our lives,” she said.

Thandile has a Bachelor of Commerce degree and is a trainee at a major bank, while Melusi is an IT technician working for a rival bank.