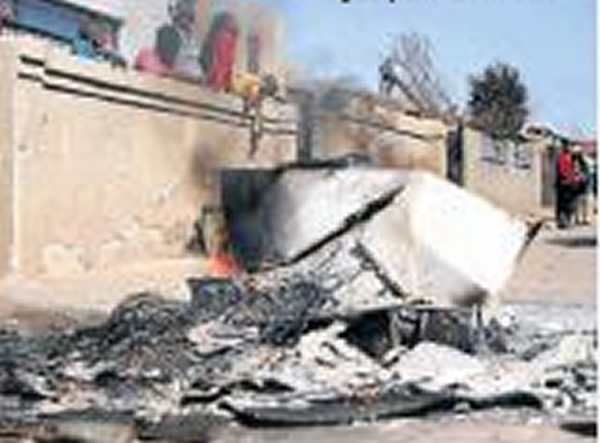 Community leaders in Phola Park in Thokoza are adamant the current violent protests in the area are not about power outages, but are xenophobic attacks fueled by poverty and lack of jobs.

The leaders said the area had endemic poverty and high unemployment. This had led some disgruntled residents to join the small group that instigated attacks targeting foreigners and people from other provinces.

Phola Park resident and former founding community leader Bathini Sigwela said poverty and unemployment had bred crime and drug abuse in the area. Sigwela, a founder member of Phola Park, said the youth roamed the streets and some had turned to drugs and gangsterism. These antisocial activities were believed to be behind the increased crime rate in Phola Park.


Police arrested at least 20 people after a week of rioting. The protesters barricaded streets with burning tyres, torched public buildings and chased off foreigners in the area.

Police Minister Bheki Cele announced that 276 law enforcement members from the SA Police Service, the army and the metro police had been deployed to maintain order. He was accompanied by Minister for State Security Ayanda Dlodlo on a walkabout in Phola Park yesterday.

Mziyanda Mketsu, councillor for ward 53 which includes Phola Park in Ekurhuleni, said the protests were not initiated by Phola Park residents. He said the instigators were an external group known as Tamaho Forum that had been chasing away foreigners and citizens from other provinces at Tambo, Mandela and Holomisa informal settlements.

“This is not a protest, it is xenophobia by a group who do not want foreigners and people from other provinces here,” he said.

Tamaho members began attacking foreigners, Shangaans, Vendas and people from KwaZulu-Natal last year, accusing them of taking their jobs. They demanded companies in Alrode industrial area reserve jobs for locals. “It started as a job reservation demand but turned into xenophobic attacks.”