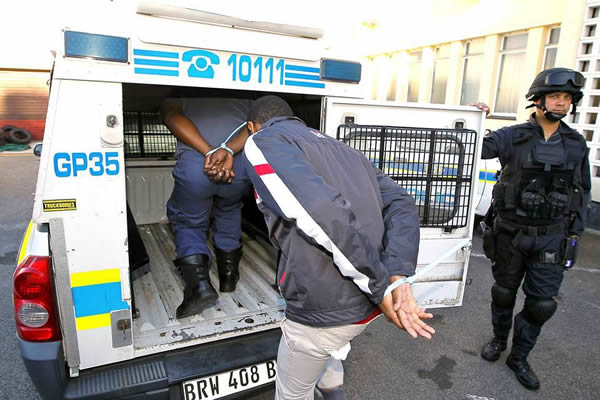 The officers are expected to make their first appearance in court on Monday.

Three Cape Town law enforcement officers were arrested on Saturday following an alleged house robbery, where the officers used their credentials to gain entry to the house.

According to police, the three officers approached the house in Dalebrook Road, Kalk Bay, on Thursday evening around 23:00.


They allegedly used their credentials as law enforcement officers to get into the house under the premise that they wanted to question the homeowner.

“The complainant was given his car keys and released to return home.”

Rwexana said a case of house robbery was registered at the Muizenberg police station.

The investigation then led police to the Beacon Valley law enforcement depot, where the three officers, aged between 33 and 36, were arrested.

“The law enforcement vehicle, which was allegedly used in the house robbery, was also confiscated.”

The City’s acting executive director for safety and security, Wayne Le Roux, told News24 that the three officers have been provisionally suspended after allegations of their involvement in the house robbery came to light.

“The Safety and Security Directorate acted as soon as it was informed of the alleged incident,” Le Roux said.

“We view the matter in a very serious light and are cooperating with the South African Police Service in its investigation.”

The officers are expected to make their first appearance in court on Monday.