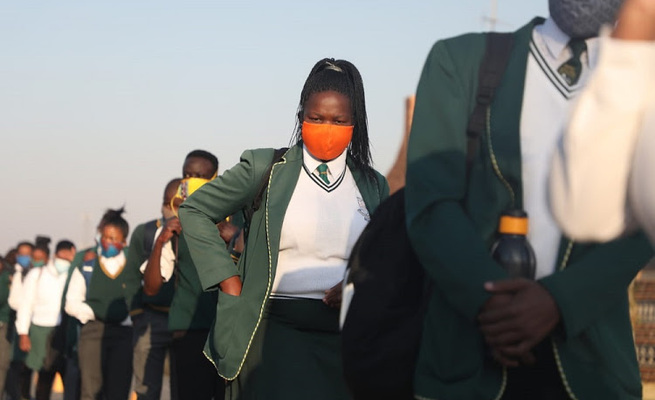 Government might consider closing schools for two to four weeks at the end of this month in a concession to teacher trade unions, which are pushing for full closure as the country hits the peak of the Covid19 coronavirus pandemic.

City Press understands that government has so far been resisting the calls by unions and parent bodies to close schools, arguing that pupils were at less risk of being infected and that the recovery rate of younger people was high. However, there are concerns about the high rate of infection among teachers.

Sources who spoke to City Press on condition of anonymity said Cabinet would most likely make a decision today that would try to find a middle ground to appease both those calling for the closure of schools and those that want them to remain open.


On Wednesday, President Cyril Ramaphosa said that there would be discussions on this matter following warnings by Mike Ryan, the World Health Organisation (WHO) executive director for the health emergencies programme, as well as concerns raised by teacher unions and other stakeholders.

Ryan said the best and safest way to reopen schools was in the context of low community transmissions that had been effectively suppressed by a broad-based comprehensive strategy.

Motshekga will table several options before Cabinet today after meetings that continued until yesterday.

City Press understands that, in a meeting on Friday, the majority of unions argued that the fact that South Africa was now among the top six countries in the world with the highest rate of infection made the call to close schools even more urgent.

But Motshekga and her team asked the unions the following tough questions:

If teachers are not going to be at work due to Covid19 while other public servants work under the same conditions, must they still be paid?

If schools are going to be closed, what will teachers be doing?

If schools were to close and reopen, when must they reopen, and which grades must reopen?

A government representative said they were worried about the precedent it would set if teachers were paid while sitting at home when other public servants such as nurses and doctors were working in hazardous conditions.

“This could just demoralise the whole public service.” He also asked what children would be doing at home, especially those without the requisite equipment to learn at home.

“We will be sending them straight to other social ills because they will be idle [at home].”

He said government might concede to a periodic suspension of classes “for the sake of labour peace”.

City Press understands that unions were also divided in their meeting with Motshekga. Some wanted schools to close, while others wanted the system to remain open.

Those who advocated schools remain open represented rich and independent schools, while those who wanted schools to close were representing mainly poorer schools.

Leading teacher union Sadtu general secretary Mugwena Maluleke said the urgency in resolving the matter of suspending classes during the Covid-19 pandemic peak could not be overemphasised.

“This is a matter of saving lives. We cannot, as a developing country, adopt the Western countries’ approach in building community immunity by sacrificing lives. We must protect the public by suppressing the transmission,” Maluleke said.

This is a matter of saving lives. We cannot as a developing country adopt the Western countries’ approach in building community immunity by sacrificing lives. We must protect the public by suppressing the transmission

Motona said they pointed out that the country was currently experiencing a spike in Covid-19 infections among teachers and pupils, despite the safety measures that had been put in place.

“More and more cases are being reported, and this makes the school environment not conducive for quality teaching and learning because there is a lot of anxiety for teachers and pupils.

“We tried to also make the minister aware that the continuing of schooling is against the advice of the WHO, that schools and countries should be careful to operate under conditions where the spike is going high.

“You can see in South Africa that the spike is going high, but schools are opening. The department of basic education is not taking any steps to ensure that schools are closed and, while they are closed, ensure proper plans and mechanisms are put in place to ensure that the health and safety of teachers, pupils and communities are given priority,” Motona said.

He said the peak of infections was still coming.

“We are very clear to say that we are requesting the minister to make a recommendation to Cabinet to consider the closing of schools temporarily until the country has passed its infection peak and reopen again when the infection curve has flattened.”

Motona added that the spirit the meeting was conducted under was not conducive because the minister and her team were noncommittal.

“We are saying that schools should be opened at the end of August and the department must prioritise Grade 12 and look at alternatives for Grade 12s to learn, such as e-learning.”

He said government wanted to punish teachers by saying they must just go to work because they were earning salaries, even though this crisis was not their fault.

“We are saying that the department of basic education and Cabinet should take our issues very seriously,” he said.

However, a second government official said there were questions that unions could not respond to, such as what would happen to teachers and the investment that government had put in place if schools were to be closed. He said there were also parents who were campaigning for schools to remain open.

Closing schools, the source said, would also hamper the department’s plans to provide meals to pupils who benefit from state-sponsored school feeding schemes.

“If schools are closed, that department will be hamstrung in performing this duty. Its plans will be severely frustrated,” the official said.

A third government official said school governing bodies, principal unions and special schools were disagreeing with unions, especially the call by Sadtu that schools should be closed.

“They said no to that, and said schooling and life needs to go on. The thing is, Motshekga needed to consult with all sector stakeholders to hear their stance and not be dictated to by Sadtu. Teachers, just like all other civil servants and working people like you should be at work amid Covid-19,” the source said.

Department of basic education director-general Mathanzima Mweli said the issues discussed were about the peak of Covid-19 and reconsidering the reopening of schools in light of all these developments.

Mweli said unions were an important stakeholder group and were among other entities that Motshekga had met with during the week.

“Cabinet will then eventually make the final decision on the matter, having considered the basic education sector’s inputs,” Mweli said.

A government official said even if a decision was made to close schools, it would not be “with immediate effect” because teachers would need time to prepare lesson plans and homework for pupils.

A government insider said the national command council appreciated that government could have been more responsive and visible in cases where teachers were reported to have tested positive and schools were closed for decontamination.

“You need to talk to people and explain the challenges. People are nervous with the infections and they are emotionally strained, so you cannot keep quiet instead of calming people down.”