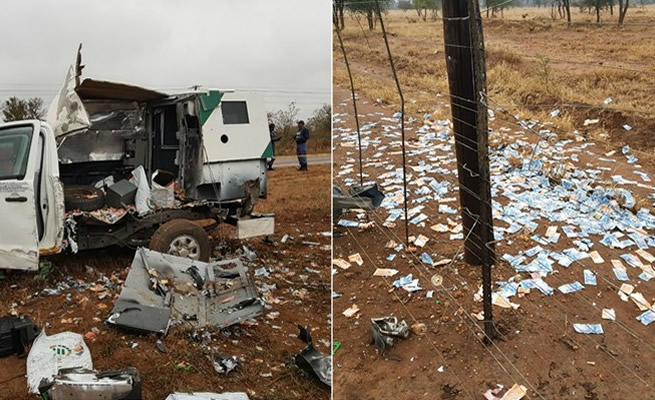 Two security guards died in the cash-in-transit robbery near Marikana village on Soutpan Road in 2018.

A man found guilty on 15 charges, including two murders in a cash-in-transit robbery, has been sentenced to two life sentences and a further 130 years imprisonment.

Stanford Manoko Diagoane, 40, was sentenced in the Gauteng High Court in Pretoria on Friday for his involvement in a cash-in-transit heist almost four years ago.


On 7 July 2018, the Gauteng Serious Organised Crime Investigation unit, Crime Intelligence and the Limpopo Tracking Team arrested Diagoane for possession of two assault rifles found at a house in Soshanguve.

The rifles were linked to a cash-in-transit robbery near Marikana village on Soutpan Road, Hawks spokesperson Captain Ndivhuwo Mulamu said.

“The armoured cash vehicle was accosted by the accused wherein the two security personnel were fatally wounded. The suspects used explosives to destroy the safe of the cash van and they fled with R641 000,” Mulamu said.

The three were also charged with murder and the possession of illegal firearms. Letshoa and Mmamadi were later granted bail.

However, three months after their release, they were killed in two separate incidents.

“Letshoa was poisoned and Mmamadi was shot and killed days before they were to appear in court for the same case,” Mulamu said.

Lekgotoane was found not guilty on Thursday and discharged.

On Friday, Diagoane was handed down two life sentences for double murder and a further 130 years imprisonment for robbery with aggravated circumstances, the possession of unlicensed firearms and ammunition, endangering lives or property and conspiracy to commit robbery. He was also declared unfit to possess a firearm.

“The Hawks have welcomed the collaborative endeavours with Crime Intelligence that has enabled the conviction of Diagoane.

“There are a very comprehensive set of initiatives countrywide to target the illegal proliferation of firearms and serious crimes. All necessary steps will be taken to apprehend those who are supplying weapons and all dangerous groups that are bringing fear to communities,” Mulamu said.