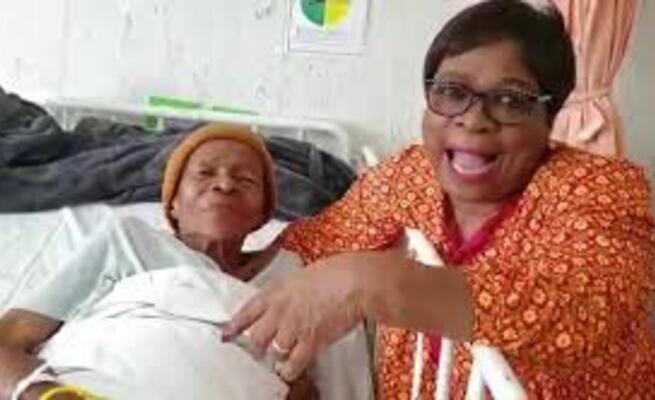 A video is doing the rounds showing Mary Twala’s last moments in the hospital. The video shows Mary Twala in a hospital bed in good spirits together with Lillian Dube. Mary Twala and Lillian Dube have been lifelong friends and shared moments together since they both have been in the entertainment industry. The video shows the two actresses laughing and sharing jokes with Lillian at Mary’s bedside at Parklane Hospital.

Wearing her hospital gown and a beanie, mama Mary says: “mina hospital or no hospital I’m pashas.” Mama Lilian asked her what they would be wearing on the 20th and she said:” Don’t tell me it’s a surprise baby. We are going to be to do.”

She carried on to say that this was only a hospital by name otherwise she’s in Hollywood. Full of laughter she asked who would get a visit from Dr. Lillian Dube?

Before giving her a kiss mama Lillian told mama Twala to get out of the hospital.

” I love you, you need to get out of this place, next year we are shooting Skwizas and want you to be part of the cast, said Mama Lillian. “NGIYAKUTHANDA mngani wami I miss you.”, she added.

Mama Twala responded saying:” I will, I will, nakanjani I’ll be part of Skwizas.”

Skwiza is the SABC sitcom the two actresses starred in.

Mary Twala, an accomplished actress in her own right, was famously known as the mum of popular entertainer Somizi Mhlongo.

Mary Twala passed away at Joburg’s Parklane Clinic last Saturday and news of her passing was shared by Somizi.

Mary Twala was buried on Thursday and an emotional funeral service held under the current lockdown regulations was held at Soweto’s Grace Bible Church.

At the funeral, Somizi said his mum had a day before she died told them that she wanted a fancy funeral with beautiful flowers and that she be buried in the dress she wore to his wedding to Mohale Motaung last year.