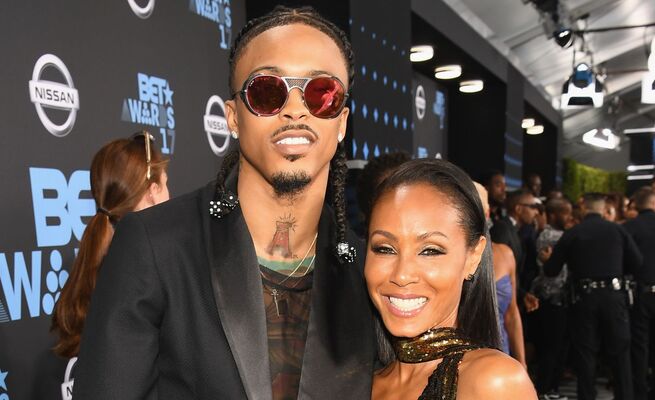 Jada Pinkett Smith has revealed she had a relationship with another man during her marriage to Will Smith.

Talking to her husband on her Facebook show Red Table Talk, Pinkett Smith said the affair with singer-songwriter August Alsina took place during a period of separation.

Pinkett Smith added: "From there, as time went on, I got into a different kind of entanglement with August."

The 48-year-old actress also said she wanted "to clear up" reports that Smith, 51, had given her "permission" to stray.
Advertisement

In a radio interview with The Breakfast Club, Alsina had confirmed that he and Pinkett Smith dated during the marriage and said it was with the full-knowledge and "blessing" of Smith – leading to speculation the couple were in an open marriage.

Pinkett Smith clarified: "The only person who can give permission in that particular circumstance is myself".

She said she could see how August "would perceive it as permission – because we were separated amicably".

"I think he also wanted to make it clear that he's not a homewrecker, which he's not," she said.

Pinkett Smith said she pursued the relationship around four years ago in a bid "to feel good" but said that she and Alsina are no longer in contact.

She said she did not look at her time with the singer as a "transgression".

Smith and Pinkett Smith married in 1997, after meeting on the set of 1990s sitcom The Fresh Prince Of Bel-Air.

The couple have two children together – son Jaden, 22, and daughter Willow, 20 – both of whom work in the entertainment industry.

Later in the husband and wife chat, Smith admitted he once thought that he and his wife would never speak again.

The couple are now reconciled, with Pinkett Smith describing their union as "unconditional love".

They concluded the interview with a fist-bump, joking around with a catchphrase from Smith's Bad Boys franchise: "We ride together, we die together. Bad marriage for life".

August Alsina is speaking out following Jada Pinkett Smith's confirmation that she and the singer were romantically involved during her separation from Will Smith.

"Imagine not knowing how to mind the business that pay you," Alsina tweeted. "I catch all the subliminals. (Not just about today) & you can call me whatever you like, Mess is constantly inserting yourself in topics you have nun to do w/. Go play w/ ya MAMMY! Not me!"

He added, "If you have something to say, say it w/ ya CHEST kids. It’s always very perplexing cause I real deal be showing people genuine love. Whole time that envy eating ya lil heart. Anyway, NEXT!!"