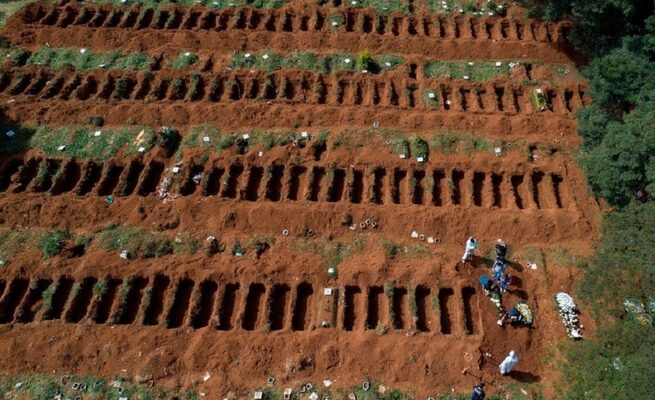 As cases continue to rise in South Africa, 1.5 million gravesites have been dug in the Gauteng province in preparation for the anticipated deaths from the virus, top officials say.

The province has revealed this is to ensure that the city would not be caught off-guard in an event of scores of deaths.

South Africa’s most populated province, which consists of Johannesburg and Pretoria, has been officially declared SA’s Covid-19 epicentre with the number of confirmed infections currently at 71,665 while there is a 15% – 30% expected increase in deaths.

Speaking to SABC News, Gauteng MEC for Health Dr Bandile Masuku confirmed the graves were being prepared, but this was not a representation of what the province was experiencing at the moment.

Rather this was a preparedness exercise from the province that already had burial site over-utilised due to numerous deaths that are not Covid-19 related.

Hence the city needed, as per general exercise, to prepare more gravesites.

Watch the video below;

#Covid_19SA Gauteng Government is preparing for the worst. This grave site on the outskirts of Pretoria, the country's capital is being prepared & reserved for Covid-19 burials. Gauteng is poised to become the #Covid_19SA epicentre soon. #eNCA pic.twitter.com/CLnEzAHbV5

The development has gained traction on Twitter through the hashtag #1millionGraves, as Mzansi panic over 1.5 million graves being prepared in Gauteng.