According to social media reports, The wife of Tshegofatso Pule’s baby daddy ordered a hitman to kill Tshego.

It is believed the wife has just received an amount of at least 8 million from her Mother’s death and hired a Hitman with an estimated amount of R70 000 to eliminate Tshegofatso Pule as she posed a threat to her Marriage.

Tshegofatso Pule who was 8 months pregnant was found dead hanging on a tree with stab wounds. She was last seen with her baby daddy leaving a flat and she got on a car (which was believed to be a meter taxi), the baby daddy stayed behind. 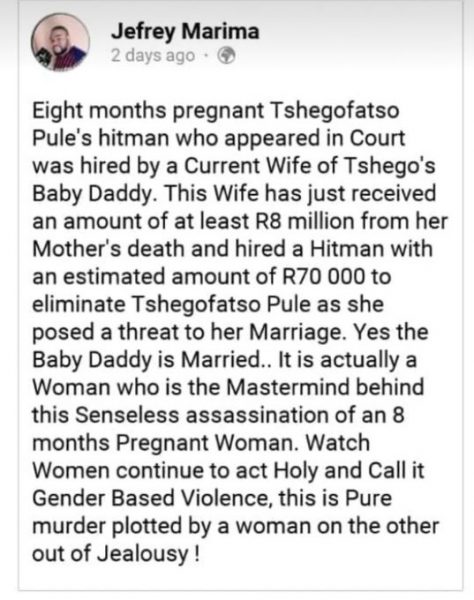 Is it true that Tshekgofatso's murder was planned by a woman, Someone said she was impregnated by a married man she was dating and the wife of the baby daddy paid the guy 70k to kill her. She recently received a payout of 8 million from her mother's death. pic.twitter.com/9VPW9nLoJe

After all the investigation done Tshegofatso murderer was arrested and he denied to apply for bail when he appeared at court.

The man who appeared in court last week crying and hiding his face is set to appear in court on 24 June,he is currently held in custody and the case is still being investigated. The man will testify on Wednesday 24 June under oath.The whole country is advocating for justice for her case.

Cheated with the husband or not, she did not deserve to be killed!!! And also why leave the husband???? Or was he raped???

Who or what killed her mother if indeed she is involved? But R8million, I am sure she could have given Tsegofatso that R70k and told her to stay away from her man. 🤷‍♂️

The husband is still alive. I wonder how many women will that lady kill before she deals with the real problem who is called husband😡😡😡

This is  developing story and claims not yet verified…