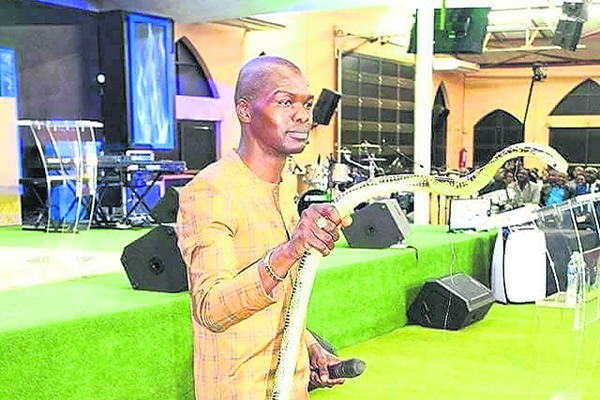 HE’S known as the pastor who made his congregation drink petrol and eat grass.

Now Pastor Lesego Daniels, the leader of the Rabboni Centre Ministries in Tshwane, has got people talking again.

He was seen with a plastic snake over the weekend.

In the pictures, Daniels is seen holding the snake as he preaches.

The church posted a statement on its Facebook page, saying: “The plastic toy snake is for teaching and demonstration purposes only.

“The man of God used this opportunity to demonstrate that the snake that was lifted up on the pole was a symbolic reference to Christ being crucified.”

The statement said the pastor took the snake used for decoration on the Holy Communion table and pointed it at a congregant, who was only referred to as Mrs Makhubela.

“Instantly, the spirit inside Mrs Makhubela was overpowered and the lady was seen falling down under the power of the Holy Spirit.”

On social media, some people said the pastor had started again with his evil ways. Others said he was doing God’s work.

Hilly Mari wrote: “This looks like the snake that deceived Eve! Can someone please send a WhatsApp to Jesus to come back Asap.”

Tebogo Bagwasi: “Can’t one person just stand up in church and tell them to stop this nonsense. Are they hypnotised or just desperate for miracles?”

Kowela Kgomo: “Can you give details on the photo? What was he preaching about, and why? Godly things sometimes are not understood, hence we have Revelations.”