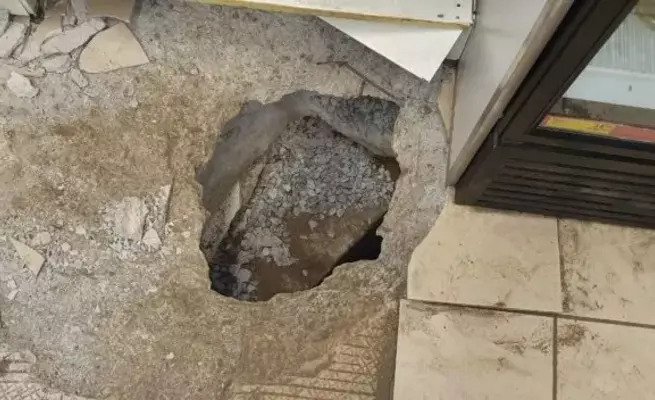 Footage from inside the store shows three suspects.

Shoprite Holdings has offered a R50,000 reward to anyone who may come forward with information on thieves who broke into one of its stores in Newtown Junction.

Thieves allegedly dug through a solid concrete floor to gain access to the store when alcohol sales were still prohibited during the Covid-19 lockdown.

A Shoprite Liquorshop employee discovered the large hole in the ground when she entered the store on Friday as she was returning to prepare for the store’s reopening today.

Oswald Meiring, the Shoprite Group’s Loss Control Manager said in a statement: “With alcohol in high demand during the lockdown period, the store was secured from the outside throughout. But the suspects avoided the mall’s main entrance and instead used electrical and stormwater tunnels beneath the shopping centre to gain access to an area beneath the store.

“They then tunnelled through the solid concrete floor directly into the liquor shop to gain access undetected.”

It was unclear how the thieves knew where to tunnel or how long it took them to get through the thick concrete floor.

The suspects were first recorded on CCTV cameras on 21 May and they apparently returned a few times to steal a large amount of stock.

Footage from inside the store shows three suspects.

They made off with whisky, brandy, gin, cider, vodka, and beer to an estimated value of R300,000, said the group.

The group has offered a R50,000-reward for any information that leads to a successful arrest.