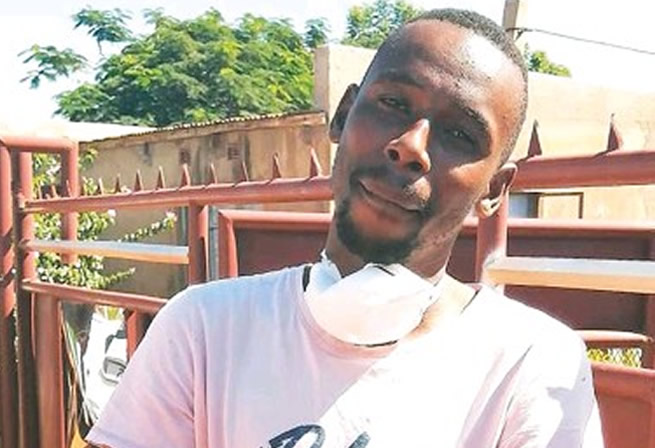 A HEARTLESS monster, infected with the deadly Covid-19 virus was stalking Tzaneen and knowingly spreading the virus to everyone he encountered. Villagers, already panicking about the disease that had rapidly crossed oceans and claimed tens of thousands of lives around the world, were terrified.

So when a picture of the handsome, smartly dressed man popped onto their cellphone screens, they shared it, and his name with everyone they knew – with terrible consequences for him.

Bongani Ngoveni was the man in the photos, but it was a few days before he found out his community thought he was a monster.

When he tested positive for the Covid-19 virus, Bongani did what he was supposed to do – he called his family to break the bad news, and asked them to prepare a separate room for him so he could self-quarantine during the lockdown.

He had no symptoms of the virus – aches, fever or difficulty breathing – but the worst was still to come for the 30-year-old.

He arrived home in Nkambako Village outside Tzaneen in Limpopo to learn that not only was his diagnosis no longer a private matter, his picture was being circulated on social media, along with accusations that he was knowingly spreading the virus.

A story that he had been arrested and charged for spreading the virus, soon followed.

Bongani is furious that someone did this to him and his family, who have suffered terrible abuse from their fellow villagers. Only an immediate neighbouring household supported them.

His mother, Angelina, says people openly mocked her and called her names, like “Mhana Corona” (Corona’s mom), and refused to interact with her or the rest of her family.

“We didn’t have any peace. When doing something simple like going to the shop to buy bread, people would blast us on social media saying we wanted to spread the virus.

“They didn’t see me as a fellow human being anymore and they would run when they saw me coming.”

Bongani has his suspicions about who started the rumours.

He suspects it’s someone he knows quite well – someone who knew of his diagnosis and who had the picture of him that went viral.

“I won’t do anything to them, but I just want to know who was responsible for spreading lies about me,” he says.

BONGANI was tested for Covid-19 after he was exposed to someone else who had tested positive while they were working in Germiston. His company, which he prefers not to name, sent him and his colleagues for testing on 18 March, covering the R1 100 cost of each worker.

“After testing, we all went home as our company closed soon after, heeding the government’s call to self-isolate.”

Bongani decided to head home to Limpopo before the start of the national lockdown, which was to begin on midnight 26 March.

“I thought this was a good time to spend time with my family as we don’t get to see each other often because of work commitments. I drove home on Thursday 26 March without yet knowing my results,” he recalls.

He was on his way home when his boss called to let him know he had tested positive.

“As I approached home, I phoned my family and explained the situation. I told them not to come close to me. They placed all essentials in my room so I wouldn’t have to move around the house,” he says.

The day after he got home he went to a private clinic to inform them of his status. He was advised to self-isolate, and he headed back home.

“But by the time I passed the local tuckshop I was already the talk of the town – and not only at home but back in Gauteng where I’d travelled from. Someone had posted pictures of me on social media and they were circulating rumours that I was walking around to make people ill.”

Then came the rumours that he had been arrested.

“I was never arrested,” he tells us, explaining that health department workers who came to his home to escort him to hospital were accompanied by police officers. He spent a day in hospital before he was discharged and taken to a house in Modimolle to be quarantined.

“It’s also not true that I attempted to run from the police. Why would I? I was saving my life. There was no reason for me to run off.”

FEAR is driving acts of stigmatisation in communities, experts say. “Covid-19 is a new disease that most people have very limited information about,” explains Dr Rendani Mafuyeka, a clinical virology pathologist. “People may have just heard how the disease is killing many people in countries like China, Italy and the USA. So if you are infected, people may not want to be associated with you because of fear of infection and possibly death.

“What the community should know is that most people infected with this virus will recover without any complications. Individuals at higher risk of complications and death are the elderly and persons with underlying chronic medical conditions such as high blood pressure, heart disease, lung disease, cancer or diabetes.

“Several studies indicate that generally people fear the unknown. This is a new disease caused by a new virus with limited information available to most people in our communities,” Dr Mafuyeka says.

Bongani explains that there was nothing to fear during his quarantine.

“I was treated well. I was in a house by myself and given strict instructions to stay put. I had access to anything I wanted to eat. I was comfortable.”

A spokesperson for the national prosecuting authority confirmed that Bongani had not been arrested, nor was he under investigation.

He spent six days in isolation and was tested again for the virus. The test came back negative and he was discharged and taken home, where he was welcomed back by Maripe Mangena, mayor of the Greater Tzaneen municipality.

“The idea was to rally community leaders to support his return home,” says Neville Ndlala, the mayor’s spokesman. “We are educating people to help them understand the virus and how to treat those who are infected or suspected to have Covid-19.

“Bongani was very emotional about his ordeal, especially the fact that people threatened to harm him and his family. He could hardly talk on the day of the visit.”

Bongani says he just wants to move on with his life.

“I have no fight in me. I do not want to sue anyone. All I’m looking for right now is to find the person who spread lies about me so I can find peace. Clearing my name is the important thing right now.”