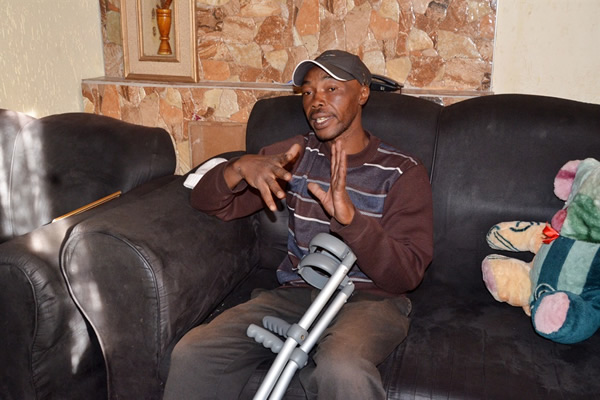 BONGANI had hot sex with a widow two months after her husband’s death.

Now, Bongani believes, the woman’s late husband is angry and he is making him suffer because he didn’t wait.

THAT DEAD MAN WANTS ME DEAD!

Bongani Thwala (35) from Jabulani in Soweto said when he had sex with the woman in 2016 his life changed, and not for the better.

“Her husband died in May 2016. She was still in mourning when we had sex and her husband was angry and sent bad luck my way,” said Bongani.

He said the trouble started only two months later.

“I was on my way to see her one night in July 2016 when I was attacked by a gang of thugs. They accused me of being a thief. They beat me up and left me lying on the street, thinking I was dead. I woke up and went home heavily injured,” he said.

“I became poor. My money just disappeared. I have never experienced that before,” he said.

In February this year he was walking with the same woman near Jabulani Mall when he was hit by a car and spent weeks in hospital.

“It was a serious accident. I’m lucky I survived,” he said.

He told Daily Sun he returned home and in April, although he was still on crutches, he decided to walk to the shops because he had spent a long time indoors.

“I went to buy bread but I didn’t ever get to the shop,” he said.

He said he was hit by a car again and found himself back in hospital.

“This time I was sure I was dying but luckily I survived. I spent another two weeks in hospital. I feel as if more bad luck is coming my way and this time I might not make it,” he said.

And now Bongani has suffered the final insult. The woman has decided to dump him.

“She no longer loves me. She has seen other men who are not broke and injured like me. I don’t care about that, all I want is for this death trap to leave me,” he said.

He said he needed someone who could get rid of his bad luck once and for all.

“I’ve been told that it’s the dead man who wants me dead for sleeping with his wife. I need serious help,” he said.

Sangoma Jabulani Mthimkhulu said Bongani should thank his ancestors by slaughtering a goat.

“If it wasn’t for the ancestors he would be dead by now. He also needs a powerful sangoma to take him to the river to have him cleansed.”