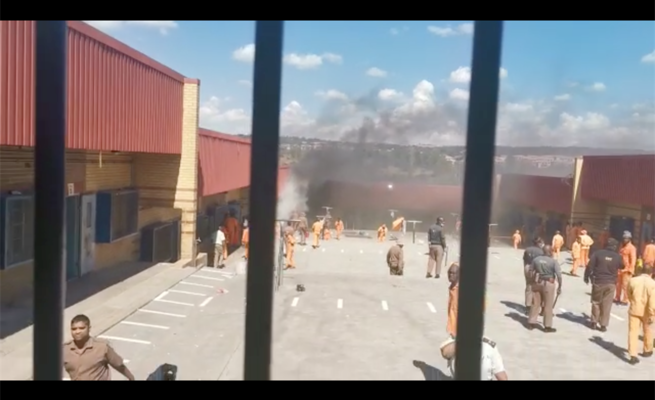 Awaiting trial prisoners at the Worcester Male Correctional Services facility in the Western Cape burnt mattresses and clothes on Wednesday in front of their cell doors, in protest over the national lockdown strict regulations in prison.

The inmates complained about the restrictions on visits, food from home, money that they receive from relatives and tobacco, City Press has learnt.

According to insiders, the mattresses were burnt in front of the B section, which consists of seven cells as well as two cells in the A section and one in the F section at the Worcester prison.

Prison officials extinguished the fires and “no inmates were injured or died”, according to a source who asked not to be named.

In a statement on Wednesday, the department of correctional services confirmed the incident but said the suspension of visits during the lockdown had not only helped prevent transmission of the Covid-19 coronavirus in its 243 facilities but also averted contraband from being smuggled into prisons.

Singabakho Nxumalo, the department of correctional services spokesperson, said there had been incidents at the correctional centres in Krugersdorp, Worcester and Leeuwkop.

He said the department was also implementing security operations at the prisons aimed at removing contraband from all prison cells.

“Despite threats of violence by a few individuals purporting to be representing the interest of offenders, correctional services is more than determined to remove all forms of contraband in its centres,” Nxumalo said.

He said the matter had been “a subtle bone of contention thus leading to the perpetuation of chaos in some of our centres”. Such chaos, he said, was then “disguised as a coronavirus scare and a protest over lack of preventative measures”.

“What remains fundamental is that a push by offenders to undermine the state is something that can never be tolerated. Hence an internal investigation is underway into the burning of few mattresses at Krugersdorp, Worcester and Leeuwkop correctional centres.”

Nxumalo said there would be consequences for the prisoners’ unruly behaviour. “Burning state property is a criminal offence and we will be making sure that all those involved in such acts of criminality are brought to book and the law takes its course.”

He said this was in line with National Commissioner of Correctional Services Arthur Fraser’s statement that “no amount of irritation can propel someone to destroy state property worth thousands of rands funded by the taxpayer, and put the lives of other offenders and correctional officials at risk”.

Fraser described the incidents as “a clear act of hooliganism which shall never be tolerated by this department”.

Nxumalo said the possession and use of cellphones and other gadgets by offenders are of serious concern and such items would be confiscated.

“The limited movement has meant that security officials can conduct targeted searches. As a result, confiscated items have little room to find their way back into the cells,” he said.

He said through these operations they had been able to identify areas where unscrupulous officials hand a hand in the smuggling of contraband and the net was closing in on them.

“We will not hesitate to take action against rogue elements in the department who collude with offenders to undermine security in our centres by enabling contraband to be smuggled. Several investigations are underway into officials who have been implicated in these rogue activities.

“The noble profession of corrections has no place for criminal behaviour,” he said, adding that the department had a duty to fight corruption.

He said the incitement of offenders was “a reckless and very harmful exercise”.

“As a department, we are committed to transparency and accountability. With that said, there are processes and procedures in place for offenders to raise their concerns and these shall be followed at all times.”