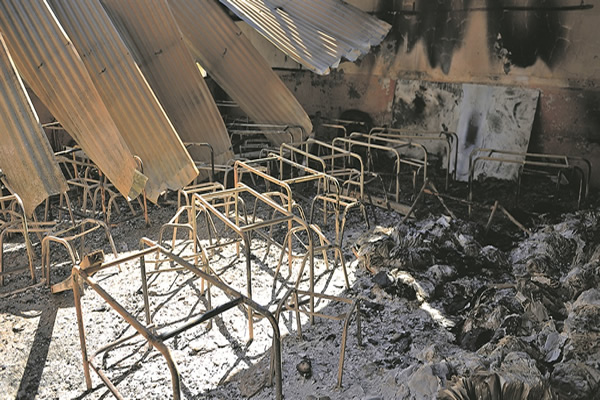 Eighteen schools in Gauteng had been burgled and vandalised by Tuesday, the 12th day of the nationwide lockdown.

This is according to the province's education department, which also confirmed that three other schools had been set alight in what is suspected to be premeditated arson.


“We are actually on day 12 of the lockdown. One ponders how the picture will look after this period,” he said.

“Members of the community are encouraged to continue [to] report [crimes] to the police. Indeed we cannot allow this barbarism to continue rob our children their future.”

The department said criminals had taken advantage of the lockdown, but similar incidents had also been prevalent during previous school holidays.

“It must be noted that such incidents are normally experienced during school recess, as by nature schools are often soft targets because of quietness and lack of activity around them during the said period,” said spokesperson Steve Mabona.

Valuable equipment and school nutrition groceries were some of the items stolen during the recent burglaries. Mabona said they would have devastating effects of the functioning of the schools after the lockdown.

The three schools that were destroyed by fire are all located in Soshanguve, Pretoria. They were identified as:

The 18 schools that were robbed were located in different parts of the province. They were identified as:

The department has called on school governing bodies (SGBs) to reinforce security.

“We think a collective effort to detect and report incidents to law enforcement agencies might yield positive results in curbing this criminality,” said Mabona.