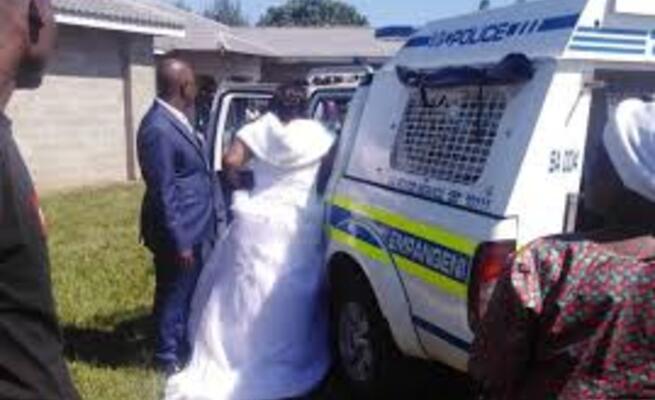 They will never forget how the police ruined their perfect wedding day.

Dumsani Zondi (46) and Thabile Ngcobo (36) from Nseleni outside Richards Bay, northern KZN, were arrested on their wedding day on Sunday.

The couple, their guests and the pastor were arrested for exceeding lockdown regulations: not having more than 50 people at a gathering.


The couple met 20 years ago and have three children aged 21, 18 and 14, who were among those who were arrested.

Speaking to Daily Sun after they were released, the couple said they were shocked when they saw cops entering their wedding venue.

Thabile said they had a permit.

"We had all safety measures in place. Our setting observed social distancing. But they ruined my special day anyway. I'm speechless. They embarrassed us in front of the whole country," she said.

Dumisani said the cops didn&rsquo;t want to listen when they showed them the permit.
He said: "We were exactly 50 including me, my wife and pastor. They counted us.We continued with the wedding. Our culture doesn't allow us to postpone the wedding once the date is set. Even if someone dies the wedding continues. As Zulus, we were just following our beliefs and culture while adhering to lockdown regulation. We were arrested with the permit in our hands."

Dumisani said they didn't even get a chance to take wedding photos.

What pains me the most is that they even arrested our guests, mostly elderly people. They should have just arrested us and allowed everyone else to go home. We were forced to have the wedding meal in custody. Even the cake was cut in custody."

Thabile's brother Dumisani Mpanza (49) said: "It was like a movie. My sister's day was ruined. She was so excited about the day. We're still angry and disappointed with the way cops conducted themselves."

The family claimed the permit was taken by the cops.

"No permit can be issued for a wedding" Naidoo said.