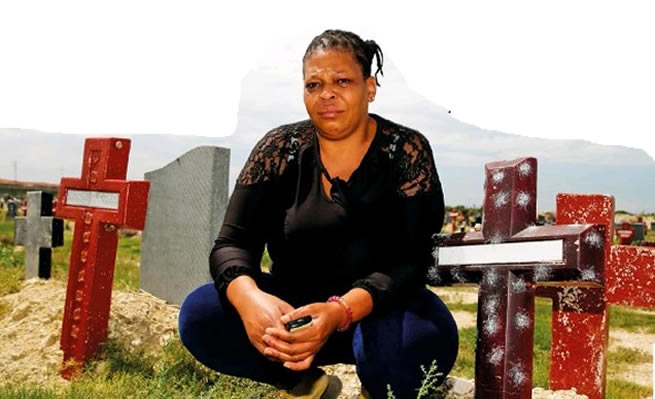 The red crosses dotting Motherwell cemetery stand out among the many grey gravestones, but it’s not easy to find Nokuthula Mjekula’s grave.

The mom of five was laid to rest in 2016 but the recent revelation that she’s still alive, and that an unknown woman was buried in her place, left her loved ones reeling.

And instead of celebrating her return, Nokuthula (41) is battling to settle back into her community.

“Who can live a normal life when there is a grave with their name on it?” she says.

Nokuthula’s “resurrection,” has brought insults from superstitious neighbours and fearful children calling her “zombie” and “ghost”. She became a cruel joke when her grieving mother was shown on SABC1’s Cutting Edge, wailing her daughter’s name.

In fact, her name became a hashtag and DJ Maphorisa cashed in on the hashtag with a remix of Phoyisa, featuring the gogo calling out, “Nokuthula!”

Nokuthula vanished from her home in Motherwell, Port Elizabeth, on 26 August 2016, leaving behind her four children (now 15, 13, 7 and 5) with her family.

Her family last saw her that day before they left for a funeral in Peddie, nearly 190km away. Neighbours who saw Nokuthula leave said she told them she was going to Cape Town, where she’d lived previously – but she hadn’t mentioned any travel plans to those close to her.

Her family reported her disappearance, then – for two agonising weeks – lay awake at night, terrified at what might have happened to her, recalls Nomahomba.

When police contacted the family to say they found the body of a murdered woman in NU8 in Motherwell, it was the start of a nightmare.

The family were asked to identify the corpse of a woman whose face had been burnt beyond recognition. She had scars on her arm and leg, similar to scars Nokuthula had after being in a car crash. Her family was certain they’d found their missing loved one.

They were shaken and decided they couldn’t wait for DNA tests to confirm if it was her, Nomahomba says.

“That was our biggest mistake. The police said DNA tests could take four to five months, and we could not imagine having her in a mortuary for so long without a proper burial, so we buried her without proper verification.

“It is only now that we realise, after all this time, that it was a case of mistaken identity,” she says, shrugging helplessly.

NOKUTHULA felt “abandoned” by her family when she decided to leave her home, family and children. “I felt like they didn’t care about me,” she said in an interview with Cutting Edge, her head downcast. “That’s when I decided to embark on a journey to Cape Town.”

Nokuthula is in another room in the shack where we’re speaking to Nomahomba, but she’s refusing to be interviewed, saying she wants to be left alone.

From the other side of the thin wall, where she has clearly been listening to us, she shouts, “Who can live a normal life when there is a grave with their name on it?”

It never crossed her mind that her family thought she was dead, Nokuthula told The Herald after her return to Motherwell last month.

She learnt of her “death” when she went to a home affairs office in Cape Town to try to get her identity card reissued.

“They told me they could not do it because I was deceased.”

Nokuthula hitch-hiked from Port Elizabeth to Cape Town where she lived with a friend for a while before moving in with her boyfriend whom she had met in the city.

Asked why she did not call her children or family for four years, she said she didn’t have a phone, or their phone numbers.

She was unemployed and could not borrow money to return home, as she would have been unable to repay it, she told Cutting Edge.

Nomahomba took care of her sister’s children until she fell ill. They were then taken in by their grandmother, Gladys, in Peddie, where they still live.

The abuse the family has suffered since Nokuthula’s return has been too much.

“We regret telling the world Nokuthula is alive,” Nomahomba says. “We are

The “dead” woman’s sister, Nomahomba Mjekula, says she and her family have had a hard time since Nokuthula’s return.

Nokuthula has been pinched by people “checking” if she’s alive, neighbours openly mock her, schoolkids shout her name when they pass their house and some even throw stones on the roof and yell at her to come outside.

“I wish people would stop making jokes about this,” Nomahomba adds.

A YEAR after her funeral, Nokuthula’s family got another shock when they were contacted by a social worker in Cape Town, who told them Nokuthula had a son the family knew nothing about. She’d had the child during her first time living in Cape Town.

Nokuthula had abandoned the child at birth and he ended up in foster care. When she came back to PE she said nothing about him, Nomahomba says.

“Life just went on for her and she didn’t say anything about the child to us, and she had two more children after him.”

That boy was the third of Nokuthula’s five children, says Nomahomba, and he’s about 13 now.

The social worker traced Nokuthula to Motherwell. Nomahomba told the social worker her sister had died, and she didn’t hear from her again, even though she’d said they would look after the boy.

“I then used TV programmes like Khumbul’ekhaya to try and find my sister’s child and bring him home.”

Yet another shock was to come. After she appeared on Khumbul’ekhaya last year, a man called Umhlobo Wenene FM to say that not only was Nokuthula alive and well, she was his neighbour.

“I was convinced he was making a mistake but he told me he had been neighbours with her for three years, and I felt my heart stop,” she says.

She asked the man to call her back that evening, and to give the phone to the woman he claimed was her dead sister. It was indeed her sister.

“The first thing that hit my mind was, ‘How will I tell my mother Nokuthula, who we had buried, was alive and living in Cape Town?’ We saw her in her children every day, and we wished she could have lived longer for them.” Slowly, she exhales, and goes silent. The family have managed to trace Nokuthula’s son and are hoping to bring him to the Eastern Cape soon.

“A woman in Cape Town made contact with us and led us to the woman who is fostering Nokuthula’s son. For the first time, I managed to speak to my nephew,” Nomahomba says.

“We will find a way to get him back with us – he must come home.”

Gcobani Maswana, a spokesperson for the provincial department of social development, told The Herald the department was investigating allegations that the social worker had cut off contact with the family.

Police are also conducting an internal investigation as to why the mystery woman’s body was released to the family before DNA tests had been done, spokesman Brigadier Thembinkosi Kinana told Cutting Edge, and investigations into the woman’s identity are ongoing.

Meanwhile, the process of returning the dead to life is a complicated affair, says a home affairs official, who spoke on condition of anonymity.

Nokuthula’s documents were submitted, but “there are no time frames, no estimates, no turn-around periods – it is a process that is dependent on the conclusion of the investigation. There are no shortcuts. It is one of the most difficult processes.”

Nomahomba is pleading with people to give her sister a break. “Be kind to her,” she begs. “She’s had a difficult time. Please stop turning our pain into a joke”.

‘We regret telling the world she is alive’