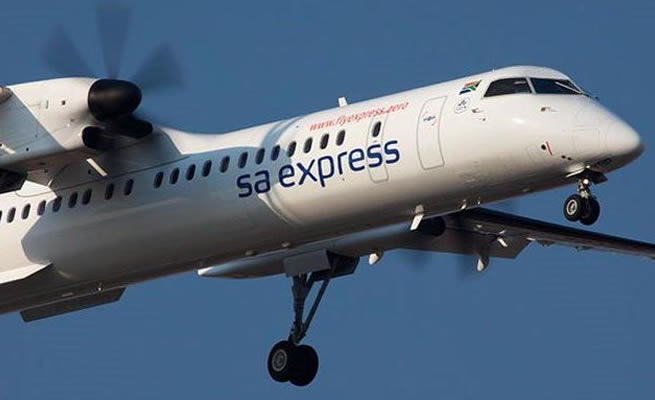 Embattled airline SA Express has suspended its operations from today (Wednesday) until further notice as the novel coronavirus eats into its operations.

The airline stated: “In light of adverse recent developments including the impact of the COVID-19 pandemic, SA Express announces that it will suspend operations from 18 March 2020 until further notice.”

The airline industry is one of those affected by the travel restrictions announced by President Cyril Ramaphosa on Sunday night as part of wide-ranging government efforts to try and curb the raging virus.

Customers who have booked with the airline need not worry as all customers will be accommodated on alternative flights.

It also revealed that all non-critical SA Express staff will be placed on compulsory leave during this time.

“The airline will utilise this period to review its current network and streamline operations for improved efficiency. SA Express will provide communication on any additional developments in due course,” the press statement added.

The airline said at the time that the business rescue process was a well-coordinated with no disruptions to customers and employees.

SA Express said in a statement: "Despite a plethora of well-known historical challenges, SA Express states that its Board and Executive team have made positive progress to ensure the long term sustainability of the airline.

"While the manner in which the introduction of the Business Rescue process occurred is unfortunate, this now provides the environment to facilitate the conclusion of initiatives that had already been initiated by the Board and Executive team. In just under 24 months, SA Express’ Board of Directors and Executive team worked tirelessly to rebuild operations and reinstate governance structures while implementing the airline’s robust turnaround strategy."

SA Express said that it continues to affirm its critical importance to South Africa’s developmental objectives through its expansive aviation value chain which impacts multiple industries.

SA Express was placed in business rescue by an order of the court in February, two months after South African Airways (SAA) entered voluntary business rescue.

The court’s decision to place SA Express in business rescue was pursuant to an urgent application brought by service provider Ziegler South Africa over debts of more than R11 million and on the basis that SA Express is unable to pay its debts.

While SA Express and SAA are both state-owned airlines, they are distinct businesses.