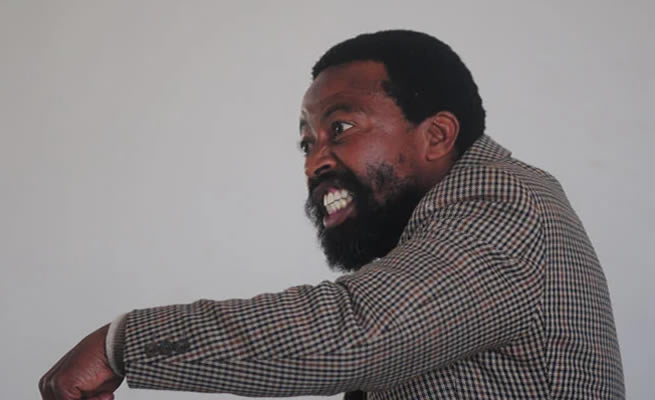 Abathembu King Buyelekhaya Dalindyebo was arrested this morning and is facing charges of domestic violence.

The king went on the rampage in the Bumbane Great Place in the early hours of the morning.

The wife of his son, acting king Azenathi, was hospitalised. Azenathi was also seen limping later.

The king, who was paroled from jail in December stormed the Great Place, throwing out clothes belonging to Azenathi and breaking furniture.

According to sources, the king – who had not visited the Great Place since being released from prison – arrived at 2am while everyone was sleeping. He was allegedly carrying an axe.

Azenathi is believed to have jumped out of the window.

King Dalindyebo, who has managed to stay out of the public eye since his release from jail, was seen taking items from the house while smoking a cigarette.

Anyone who dared come close to him was met with insults. This City Press reporter was chased out of the great place when he tried to take picture.

“Why are you taking pictures. Who gave you permission to take pictures? Have you lost all respect? Get out of here. I don’t care even if you insult me in your newspaper," said King Dalindyebo.

The king is out of parole after serving four years of a 12-year jail sentence. He had been convicted for assault with the intent to do grievous bodily harm, kidnapping, defeating the ends of justice and arson.

The controversial Abathembu King could be seen talking a walk around the great place as members of the family, police and villagers looked on helplessly. His son, Azenathi, his uncles and the kings brothers, Pat and Siganeko were among those who watched as the king moved around his palace.

Some police officers, who spoke on condition of anonymity, initially said there was nothing they could do because the king was in his property and had harmed no one. Dalindyebo has refused to see his son since being released from the East London Maximum Prison.