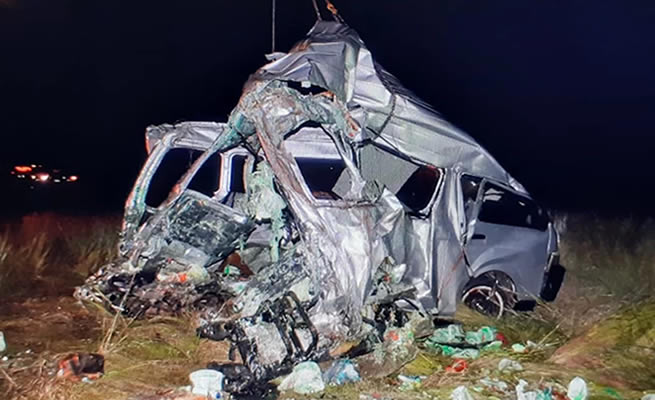 A collision that occurred on the N4 toll road in Hectorspruit between a truck and a minibus taxi has left seven people dead on Tuesday at around 23:30.

It is suspected that the driver of the taxi may have lost control before crashing into the side of the truck.

Various ambulance services responded to the scene and the injured were rushed to nearby Shongwe and Tonga hospitals as well as Mediclinic Nelspruit where they are receiving attention.

The injured include the driver of the truck.

The taxi was reportedly travelling from Johannesburg to Mozambique when the crash took place.

The victims were all from the taxi and they include the driver. The deceased are four women and three men.

The cause of the crash is still unknown and the investigation is under way.

According to Mpumalanga Community Safety, Security and Liaison spokesperson Moeti Mmusi, MEC Gabisile Shabalala was deeply saddened by this latest crash and appealed on motorists to use the road safely.

"Transportation of goods and people is the backbone of our economy and therefore more caution should be applied by the drivers at all times so that deadly crashes are drastically reduced," Shabalala said.

She added that the crashes were afflicting unbearable pain and untold suffering to many families. Therefore, motorists should play their part and always obey the rules, Shabalala said.

The MEC also bemoaned the enormous cost that these crashes, which are mostly avoidable, were costing the economy.

"Billlions of rand [are] lost annually to deal with the aftermath of these deadly crashes which are mostly preventable," she said.

She wished those who were injured a speedy recovery.

The Road Traffic Management Corporation's (RTMC) State of Road Safety Report: Calendar for 2018 found that minibuses accounted for 9% of crashes, and most collisions happened on Saturdays (25%) and Sundays (22%).

The RTMC calculated the total collision cost at R142.95bn.