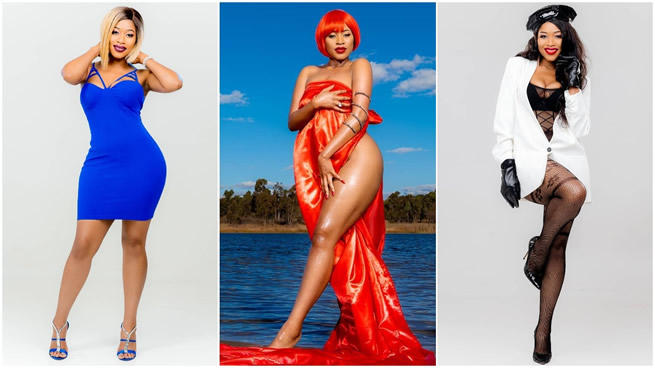 Rachel J, the woman whose husband accused her of having an affair with popular man of cloth has finally broken her silence following sensational allegations made by ‘husband’ Terence Mukupe that she was impregnated by Prophet Shepherd Bushiri. Mukupe who is the former deputy minister of finance and economic planning for Zimbabwe claimed that Bushiri had carried out an adulterous affair with his wife resulting in her becoming pregnant.

While the two men had a go at each other on social media with Bushiri furiously denying the salacious allegations and Mukupe claiming that he has evidence of the affair, Rachel J remained curiously quiet.

However, she had now spoken out over the matter through her family. The family denied the allegations and said that the two were never married but were actually cohabiting. They accused Mukupe of being a bitter former lover who wanted to tarnish Rachel J’s image. They went on to claim that Mukupe was so hurt at being dumped that he attacked Rachel J physically and tried to kill her vowing that if he cannot have her, no other man can. Rachel J is said to have dumped Mukupe because he sired four children with other women during the subsistence of their relationship.

Below is the full statement from Rachel J’s family,

“We as the Rachel J family, have decided to come out and address the accusations being levelled against her that are being circulated on social media by a Terence Mukupe.

“It has taken us this long because, we wanted our daughter and sister to give birth in peace, and the fact that Rachel J being the private person she is, didn’t want to get involved in this social media fiasco, and also her dealing with the emotional trauma after she was attacked by Terence Mukupe at one of her residence and she had to seek a protection order against Terence Mukupe.

We want to state that these are malicious and defamatory statements issued. As you know, Terence Mukupe relies on unseemly and ungodly false attacks on others to maintain relevance.

“These allegations are unequivocally false, totally unsubstantiated and uncorroborated, and it’s a malicious and desperate attack on Rachel J and our family by a disgruntled individual who swore before the Police and witnesses that he would do everything in his power even if it meant fabricating

material to destroy Rachel J, anyone close to her as well as discrediting her to her business contacts. He swore if he can’t have Rachel J no one else.

“Reason being Rachel J had terminated their relationship. Because she had discovered that Terence Mukupe had once again impregnated Tracy Winterboer, who just gave birth a week ago a few days before Rachel J’s giving birth.

“This being the second child sired with the same woman during Rachel J’s relationship with Terence Mukupe. What’s disturbing is he secretly moved this woman to South Africa near Rachel’s place of residence so that he can be close to her.

“What hurts us is the treatment she is getting from this man who constantly cheated and humiliated her by siring 4 kids whilst in a relationship with Rachel J, whom she embraced looked after and welcomed into her own home. Rachel has shown love and commitment toward his kids by assisting them with education, food and clothes.

“Terence Mukupe should realise that he is a father, he should stop this humiliating behaviour and take care of his 10 kids. For a man blessed with so many kids, he must stay away from public humiliation and realise that his kids will have no one to look up to and also for a man who claims to love his so called wife but humiliate her in public over infidelity whilst he was sleeping with different women in her office, it is puzzling.

“Terence Mukupe is no stranger to rejecting his unborn babies. He only comes through claiming the paternity after the expenses have been covered. What annoys us is the fact that Terence continues to deny this child in public whilst privately he and his family are requesting to be a part of this child’s life, claiming it’s theirs.”

“On the issue of cultural activity and occultism it’s really shocking coming from a man, with incisions (nyora) all round his waist, who jumps from sangoma to sangoma every weekend trying to attain evil powers to become a President.

“Do not let us spill your beans. Kindly advise us on where we can deliver your  black and red occult cloths which you left at our daughter’s previous residence.

“Do not deny this as your relatives who stayed with Rachel J have all the knowledge of your occult activities. He became violent after Rachel had cut off all financial support towards him, his children and baby mothers. After having lost Rachel everything including vehicles he became a violent man. No one of any gender, adult or child deserves this kind of abuse. Attacking a defenseless pregnant woman is a sign of weakness and should never be supported in our society.”

Rachel J was never married to Terence Mukupe, formally or customarily. She is a single woman. As family we have never met Terence Mukupe nor has he ever set foot in any of our houses. He should not confuse dating to marriage. We are grateful for Rachel refusing to marry this man, because of his infidelity and misuse of her wealth. Initially we were shocked because Rachel has never dated a politician. She has always believed in love, and not relationships based on money since she is an independent woman.

Because of Rachel’s naivety she allowed this man to move in to her home. Having moved in without anything in his name, she transformed his life into a respectable member of society with something to his name and his family is aware of this. Rachel has always been a serial entrepreneur with vast business interests in the cleaning industry, mining, fashion, media, transport and logistics. She welcomed the idea to work with this man and fought by all means to build a business empire with him.
As a family we are in deep shock and distress, with the developments that are taking place, considering the amount of resources poured into the life of Terence Mukupe by Rachel J. Just to name a few we are all aware of what went into the last political campaign which she sponsored from the massive billboards, regalia, media, campaign vehicles, sarongs and newspaper. These resources could have been put to better use as a family. Rachel has always protected Terence reputation in making people believe, he was the one taking care of her. Yet he solely relied and lived off Rachel, funding his 5 baby mother’s, kids and girlfriends.

The claims being levelled at Rachel J, of being impregnated by Prophet Bushiri are unbelievable with his evidence stating that they met in 2018, how is it possible for her to carry a pregnancy for two years.
“We are confidently waiting for Terence Mukupe to through for a DNA test. Terence statement that Rachel asked for forgiveness is false.

“The claims that Terence Mukupe ceded R100 000 are totally baffling for a man who doesn’t even have a property to his own name and was failing to pay school fees for his children by that time.

“Whose house was repossessed by the bank. Rachel has been paying rentals for his family to still be able to continue living in that property. He has been failing to clear his debts and the lawyers have been communicating with Rachel who has been helping him to clear those debts.”

“Terence Mukupe should give us evidence of the plane tickets he paid for Rachel to go to Malawi, and also evidence of him expressing interest to do business with Prophet Bushiri whom he has never met. No one stands to gain from publicly humiliating someone, instead it leaves scars.

“Terence Mukupe should realise that Rachel J is not only a business woman but also a mother, and the damage he has caused is irreparable. He has caused great emotional pain to her daughter and this will leave a scar for life. Regardless of the fact that Rachel J has decided to stay in recluse and quiet over this issue we felt it in our best interest as a family to come out and clear a few issues which were raised.

“This is a truly hurtful time for us, because we know the type of a person Rachel is who has done nothing but show love and commitment to this man. Wisdom is understanding that relationships come to an end, and this should be done amicably without abusing the other partner. We should be the ones fighting and humiliating him, because he never looked after Rachel instead it was vice versa to a man who showed no love and appreciation.

We pray that God guides Terence Mukupe in the right path. The more that we choose not to talk about domestic violence, the more we shy away from the issue, the more we lose.”

“Terence Mukupe should realise that Rachel J is not only a business woman but also a mother, and the damage he has caused is irreparable. He has caused great emotional pain to her daughter and this will leave a scar for life. Regardless of the fact that Rachel J has decided to stay in recluse and quiet over this issue we felt it in our best interest as a family to come out and clear a few issues which were raised.