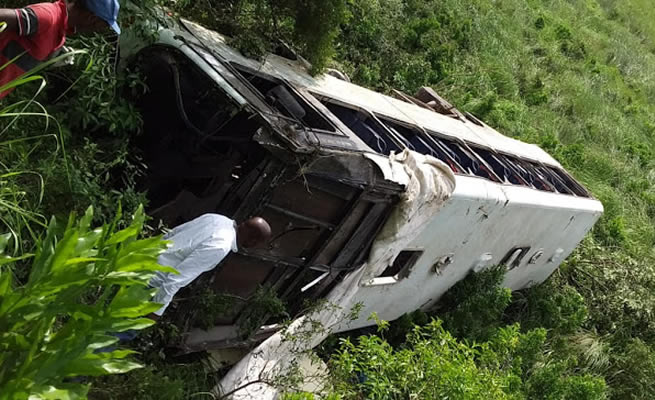 A total of 25 people were killed and 61 injured in a bus accident in the Eastern Cape on Monday, the Road Traffic Management Corporation (RTMC) has said.

The bus was travelling on a gravel road near the Tafalofefe Hospital on Monday morning around 08:00 when it overturned, said RTMC spokesperson Simon Zwane.

"The Marcopolo bus was travelling from Chebe, picking passengers at locations along the road to Butterworth," he said.

The horror bus crash that claimed 25 lives and injured at least 70 others was most probably partly caused by overloading, Transport Minister Fikile Mbalula said.

Mbalula was reacting to the crash on a gravel road in Willowvale at Qolweni location in the Eastern Cape. The bus was travelling from Chebe, en route to Butterworth.

Reports indicate that the driver lost control of the bus, which subsequently rolled down a steep embankment, leaving 25 dead and approximately 70 injured.

The root cause of the accident is unknown at this stage.

"It is not business as usual for me. I want to know what happened. The numbers tell you that this is a result of overload," Mbalula said.

"To lose so many lives in a single accident is devastating and shocking. I send my heartfelt condolences to the bereaved families and the community of Centane. We are committed to expediting the Road Traffic Management Corporation's (RTMC) investigation and ensure that it is concluded speedily. We remain committed to strengthening our measures aimed at ensuring safety of our people on the roads.

"This includes regular reviews of procedures to ensure vehicle fitness, ensuring that drivers are fit to drive public transport vehicles. We will also continue to ensure that the conditions of our roads, including gravel roads are maintained in a manner that ensures they are safe to drive on," Mbalula said.

Eastern Cape Department of Health spokesperson Sizwe Kupelo said they had dispatched two helicopters and ambulances after hearing about the accident between Mazeppa Bay and Cebe.

"Because of the terrain where the accident happened, our helicopters cannot land. Our ambulances are on the ground while others are on their way to the scene of the accident."

First responders reported spotting at least 10 bodies which appeared to have been thrown from the bus when it rolled.

"We have instructed hospitals in Mthatha and East London to keep beds unoccupied in anticipation that those who might be injured will be transferred there. As soon as the search and rescue mission has been completed, we will keep people informed as to where they should go to see their loved ones."

The first passenger to be airlifted to East London was a critically injured three-year-old boy.

Reports indicate that the driver lost control of the bus, which subsequently rolled down a steep embankment, leaving 25 dead and approximately 62 injured. The root cause of the accident is unknown at this stage. https://t.co/BggHIqy0kL pic.twitter.com/LW9EWFGNOB

President Cyril Ramaphosa has also lamented the horror bus crash that claimed the lives of mostly pensioners and pupils.

The president offered condolences to the families of the dead and wished the survivors a speedy recovery.

"This is a sad day for the people of the Eastern Cape and our nation at large. This tragedy leaves our country deeply saddened and forces us to focus yet again on the need for transport providers and other road users to exercise care and consideration on our roads.

"We must take care of one another as compatriots and, from this incident we see the need for us to be especially considerate towards elderly persons and children who depend on others to be conveyed around communities and the country.

"Safer roads begin with safer attitudes and behaviour. This tragedy is, sadly, yet another wake-up call to all of us to ensure that we arrive alive and those who are entrusted to our care arrive alive," Ramaphosa said.

According to RTMC's National Road Safety Strategy 2016 – 2030, vehicle factors make up 14.1% of fatal collisions, while human factors account for 73.6% of fatalities on the roads. The road environment accounts for 12.3%.

The report highlights fraud and corruption as a key factor in the enforcement of traffic safety rules.

"The effects of fraud and corruption further impact on the manner in which traffic laws are enforced, enabling an environment where traffic law enforcement can be perceived as poor."