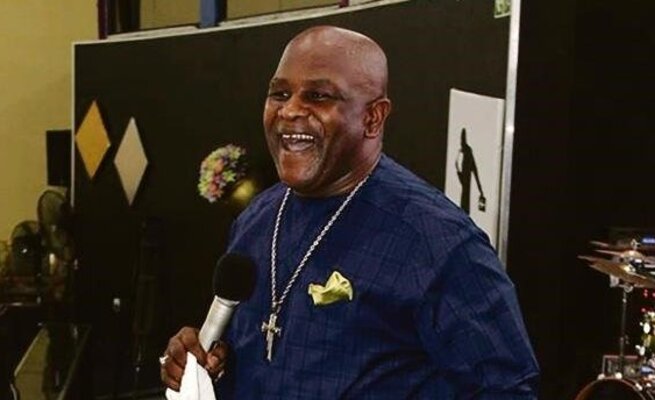 THE soccer star claims he never belonged to any cult or secret society.

But he did poke virgins to gain wealth and fame.

THIS WAS THE ADMISSION BY FORMER SUPER EAGLES AND MOROKA SWALLOWS GOALKEEPER IDAH PETERSIDE, WHO IS NOW A BISHOP.

Peterside was responding to allegations of initiating virgins into occultism.

This after a number of Nigerian publications claimed earlier this month that he confessed on a Lagos radio station that he was part of a cult.

Peterside allegedly said every woman he poked was initiated through the spilling of blood when he had sex with them.

These allegations have followed Peterside for years, with several Nigerian publications reporting on them from as far back as 2015.

Last week, Peterside, who is a bishop at Christ Ambassadors Church in Kempton Park, Ekurhuleni conducted an exclusive interview with Atv Channel, where his church service is live streamed. But the interview, which was posted on the channel and YouTube last Thursday, came after Daily Sun contacted Peterside to set the record straight about the alleged radio confession he made in Lagos.

After promising to reveal all to the People’s Paper, he later declined to talk to the paper and referred it to the Atv interview.

In the interview, Peterside said he slept with virgins out of his own desire, adding he was under some form of demonic influence.

“I had a dislike for normal women. I just had a preference and that was virgin women,” he said.

“I never went to any secret cult. I was just living in sin. There were demonic influences manipulating me to do things that I did,” said Peterside, who insisted he is now a man of God.

He said he was raised by parents who were pastors but as a youngster, he was driven by the desire to succeed and be famous in sport.

Peterside said he one day saw a python before a match and his life changed.

“As I was about to get into the toilet I saw a python, a big massive snake. It was looking directly at me. I felt something had entered me and I shivered and ran back.

“From then on, my life changed. I got excited about the things of the world and started following women,” said Peterside.

He said he was tormented by voices for almost 10 years, telling him he’d have money and fame if he slept with a lot of virgins.

“I knew something wasn’t right with me. It was odd. When I heard about a woman being pure, I wanted to go there. I wasn’t attracted to women who are said to be loose. It continued for years.

“I felt that the more I obeyed that voice, I will have money and become famous, but the money and fame wasn’t coming the way I expected,” he said.

Peterside said he changed his life when the very same voice started threatening to kill him.

He said he gave his life to God and never looked back.

His said his church has grown and has more than 2 000 congregants.

In 2018, Sunday World reported that a 21-year-old woman from his church was found in one of Peterside’s properties after her disappearance for five months.

The publication said her mother was looking for her and told the paper she had received odd calls from her daughter that she was placed in a house with five other young women, but they were not allowed to be in contact with their families.

The paper reported how the police raided his property and rescued the woman.

According to the paper, in his response, Peterside said the police later called him to apologise as they found out that the woman in question was lying.

In the book, he goes into details of his encounters with forces that can’t be seen by the human eye.