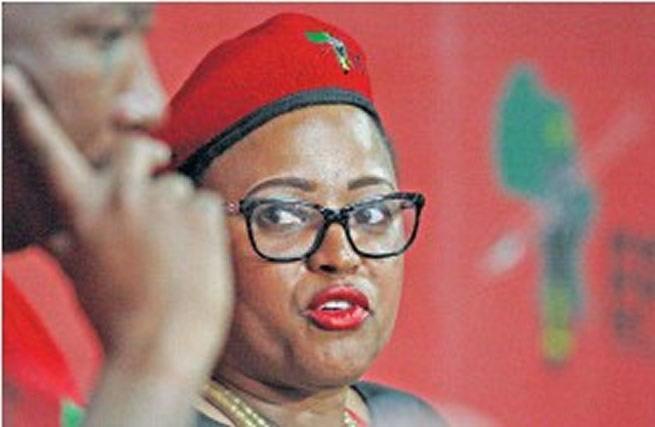 Gauteng EFF leader Mandisa Mashego dropped a bombshell when she resigned from her provincial chairwoman position on Monday.

Mandisa has also resigned as the red beret brigade’s caucus leader in the Gauteng provincial legislature and as a member of the legislature.

The well-known leader is now an unemployed ordinary member of the EFF.

Mandisa’s resignations from her leadership position and plum job are akin to the exit strategy used by musician Benny Mayengani.

Mayengani first resigned from his job as EFF councillor in the City of Johannesburg last year after complaining that the party leadership chose his fellow artist Ringo Madlingozi over him to become one of the party’s 45 members of parliament.

Mayengani later resigned from the EFF and was unveiled as an ANC member by Limpopo premier and ANC provincial chairman Stan Mathabatha during the party’s January 8 celebrations in Limpopo.

Mashego’s shocking resignation was revealed by two Gauteng EFF members who did not want to be named because they are not allowed to speak to the media.

“She resigned on Monday. The resignation letter, which is two pages, was sent to our secretary-general Marshall Dlamini and commander-in-chief Julius Malema on Monday,” said the EFF member.

“The leadership has accepted her resignation with open hands. We know this is the same modus operandi used by Benny. We are expecting her to resign as a member and leave the party in the not-so-distant future.”

The member also said the resignation is likely to send Gauteng EFF into a special provincial conference or early conference to elect a replacement for Mashego.

Mashego first hinted to her supporters about her planned exit when she removed all her personal belongings from her legislature office three weeks ago amid simmering tension with Malema.

So serious had been the tensions that Mashego didn’t even accompany Malema and former party spokesman Mbuyiseni Ndlozi to Parktown Boys’ High pupil Enoch Mpianzi’s funeral in Joburg a few weeks ago.

The member said Mashego’s resignations were precipitated largely by a tweet posted by Malema last month in which he told former Joburg mayor Herman Mashaba that he was aware that two of his provincial chairpersons were talking to him in a bid to join Mashaba’s new party.

Malema encouraged Mashaba to expedite the negotiations with the chairpersons, whom he did not name, so that they could swiftly leave the party.

“I’m told one or two of my provincial chairpersons, one from the inland province and one from the coastal province, are also speaking to you. Please speed up the process,” read the tweet.

The members said Mashego took umbrage at Malema’s tweet as she construed it to mean that she and EFF Kwazulu-natal leader Vusi Khoza were talking to Mashaba.

Mashego was the only inland EFF leader who didn’t support Malema’s #matorokisi slate at the party’s elective conference in December while Khoza also did not toe the party leader’s line.

Mashego’s faction wanted her to be secretary-general but was pipped to the post by Dlamini.

Entertainment Palesa Ndaba - 19 October 2020 0
A man in his thirties of Mwamba area in Mpongwe Zambia has died during sex with his lover. According to Copperbelt police chief Charity Katanga,...

Celeb Gossip Lovemore Lue - 19 October 2020 0
Songbird and actress Nandi Madida and her manager, Amaru Da Costa, are at each other’s throats over a R3.7-million Lux deal she clinched in...

Mzwanele Manyi under fire for hiding Gupta assets worth millions

General News Lee Nyathi. - 19 October 2020 0
Liquidators accuse the former government spin doctor of refusing to disclose the whereabouts of the assets of the failed TV station The company owes...

General News Lee Nyathi. - 19 October 2020 0
Health Minister Dr Zweli Mkhize and his wife have tested positive for the coronavirus. The minister revealed this on Sunday night, saying the couple were...