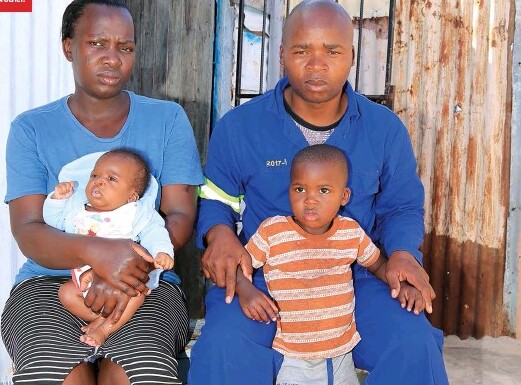 Missing twin baby’s family open up about their pain

Nothing is so soul-draining like having been blessed by a child, only for it to go missing and never to be seen again, such was the feeling for the parents of a kidnapped twin baby Kwahlelwa as they told DRUM magazine what transpired on the fateful day.

The young-mother felt as if a lump had developed in her belly as she looked around the post office, trying to be strong by telling herself that everything was okay.

'The polite social worker who is with my baby boy must be here somewhere and would soon return my baby,' she reassured herself .

The seemingly devastated Asanda Tiwani had her three-month-old baby, Akahlulwa, in one arm and her two-year-old son, Ebonga, clung at her free hand as they paced up and down the street as they look for Akahlulwa’s twin, Kwahlelwa.

After one last search around the pale looking post office building and with her heart now pounding faster and faster, she rushed outside. The Voortrekker Road in Parow, Cape Town, was as busy as usual, filled with cars, taxis and people, further complicating her search.

Asanda (29) looked both sides of the busy street before hurrying back towards the bustling taxi rank. She thought that maybe she had misunderstood what the young woman had said, and they were supposed to have met back there to go back to her Khayelitsha home.

Her cell phone beeped, momentarily interrupting her thoughts, she glanced at her phone.

The text message was the beginning of a spine-chilling nightmare from which Asanda is still hoping to awake from. “Take a taxi back to Khayelitsha, I have noticed that taking care of the children is very difficult. I will take care of him until you guys are alright,” the message apparently read.

The Tiwani family’s world collapsed since Kwahlelwa was taken away from them almost a month ago.

Kwahlelwa’s dad, Siyanda Thongani (34), is making frantic efforts for his baby boy to be returned.

His voice was unsteady and shaking as he recalled how the young woman, who identified herself as Monica came at their home on 10 January 2020 claiming to be a social worker from the Nonceba Family Counselling Centre in Khayelitsha and promised them government-sponsored support.

This Good Samaritan was all what the unemployed parents had been praying for.

“She offered to assist us with obtaining birth certificates for the twins, monthly food parcels as well as a R1 000 food voucher,” Siyanda told Drum magazine.

A day after their son was taken away a teenage learner at Claremont High School, Karabo Tau (18), was picked by police. Moments later, Ely Kibunda (22), who was alleged to be Tau’s boyfriend, was also arrested, detained and charged with kidnapping the baby.

Kwahlelwa, however, is still missing.

The young woman bought the struggling parents' trust by arrangements for them to complete affidavits as if in good faith and made them fill in documents at different police stations and home affairs offices between 10 January and 16 January.

“Monica always insisted the twins accompany them, saying their presence was evidence to confirm Asanda does not want the aid for herself but for the children”, Siyanda said.

She was so kind and caring, whenever they moved around with her, she would carry one twin and Asanda would carry the other, he added. “She told me she works for Nonceba, a Khayelitsha-based shelter that cares for people who are struggling. She told me she lives here in Khayelitsha, Site B, M section”.

The Nonceba Counselling Centre works with the courts and the department of social development to provide counselling for victims in domestic abuse matters, explained the centre’s manager, Msokoli Zilani.

“We do not provide any door-to-door services, unless we are carrying out awareness campaigns. Nor do we work with or provide any vouchers. We do not know of anyone by the name of Monica who is an employee or a social worker,” Msokoli Zilani added.

On 16 January, Monica phoned Asanda at 7am and said they would be going to Parow Post Office to collect the promised R1 000 voucher that afternoon and insisted on having the children be brought along.

“She arrived at about 2pm and we took a taxi to Site C, to the Khayelitsha central taxi rank. I was carrying Akahlulwa and she carried Kwahlelwa. I also had Ebonga by the hand,” Asanda said.

From there, they took another taxi to Parow.

“She would always pay for our taxi fare. When we arrived in Parow she gave me money and said, ‘Go buy yourselves a cooldrink. I need to go to the post office to post some things’,” she added.

Asanda did as Monica suggested. “I went back to the post office to look for her because I was worried the other twin might be hungry. When I couldn’t find her, I called the twins’ father to send me her number because it was in a phone I had left behind,” she said.

Monica could not answer the phone, only after various attempts by Asanda, she sent her the text message.

Drum magazine had a glimpse of the SMS, which Asanda claimed she received the day her child was kidnapped, but the message was dated 1 January.

A source said Asanda had changed SIM cards, which could have affected her phone’s date settings, however, the SMS did not feature in the bail hearing as evidence.

Karabo’s lawyer, Sulaiman Chothia, told DRUM that the SMSes had not been brought forward as evidence in court, nor had he seen them.
“The state has alluded to [the SMS allegedly sent by the kidnapper], and the investigating officer indicated to me that they are going to download some stuff off [Karabo’s] phone which would take a few minutes.

“He took my numbers, so if there were any SMSes I would have been told about it before the outcome of the bail application.

“So, if there were any SMSes, the question is, why didn’t the state do something about it at the outset?” Chothia queried.

Asanda called Siyanda, who in turn called the police. They traced Monica’s cellphone number to a Facebook page linked to Karabo and arrested her the next day, after Asanda identified Karabo as “Monica”.

Karabo pleaded guilty to the charge by signing a confession admitting she’d stolen the baby, but later withdrew her admission of guilty statement, saying detectives had forced her to sign it. “I don’t know where the child is and I didn’t take the child,” she testified at her bail hearing.

"The police threatened me, saying I would never get out of jail, so I wrote what the detectives told me to write," she told the court. "I had been interrogated for 10 hours at Parow Police Station without being allowed to eat or drink anything during that time," she added.

She also said it was not true that Kibunda was her boyfriend, adding that she met him on Facebook and that the last time she had seen him was in November, when they bumped into each other at a shopping centre.

She insisted that she had nothing to do with the missing baby and told the court she had been in school at the time of the kidnapping.

To further complicate things, her isiXhosa teacher, Thokozile Godana, also testified Karabo had been sitting in the front row of her class, at the school, which is about 30 kilometres from Parow Post Office.

Closed Circuit Television footage from the school, which was admitted as evidence, showed her leaving the class at 3pm.

When state prosecutor Tobinceba Matrose raised the point that the footage was 20 minutes ahead of time, the school’s IT manager, Johan Thompson, responded that the video footage had not been tampered with.

Karabo’s uncle, Dumisani Njengele, also testified saying the phone number the police used to trace Karabo was one she no longer used, adding that it could have had been reassigned by the cellphone networks.

“The police have still not given us the number that they say they used to trace Karabo,” he said.

Meanwhile, Karabo was freed on a bail of R2 000, after the state failed to convince the court beyong reasonable doubt that she shouldn't be granted bail.

“This case, where a baby has gone missing, is a tragedy – and this court is not here to decide if the accused is innocent or guilty,” magistrate Charles Scott ruled. “The state needs to prove it is not in the interests of justice to grant bail to the accused. But this court, however, is not satisfied with the state’s evidence led.”

Themba Njengele, one of her uncles, said his niece’s release was the answer to their prayers. “We know this is not the end, but the family is so happy that she is out.”

Charges against Ely were withdrawn, whilst Karabo’s case is expected to resume in April.

Ely’s lawyer, advocate Leon Fieties, told News24 that he is going to pursue a civil case on the grounds that his client’s rights were violated.

However, the court appearances have not done much to cool the despair and pain the Tiwanis are feeling.

“We are really suffering. People have suggested we go for counselling, but we don’t know how to talk about these kinds of things,” Siyanda said. “Akahlulwa is always crying for his twin and Ebonga keeps asking us where his brother is.”

Meanwhile, Asanda is pleading to whoever has her baby to return him. “It is very painful. I have not been well since this happened, I’m begging them to bring me my child,” she said.