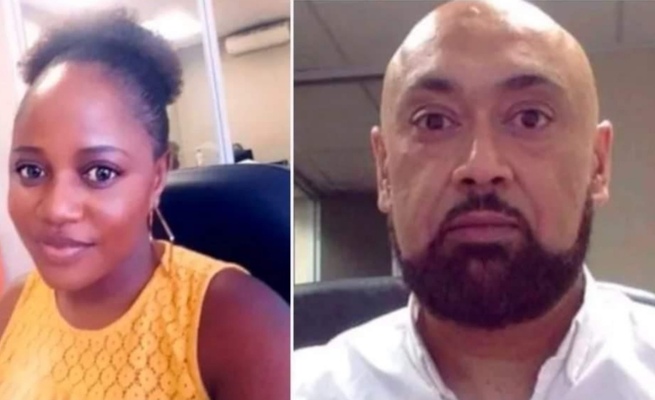 What transpired on that day may pass for a plot in a steamy adult only movie, but for those who witnessed the illicit office hook-up, what happened in the office building located in the heart of Sandton, Johannesburg, is real.

It sounded as if it was a blue movie clip after two employees were captured live on camera having sex in an office housed in a glass building along Katherine Street, in Sandton.

The video footage of the act which was later shared on social media is more than enough to drown even most open-minded person in the pool of shame.

The video clip showed an unclothed man and a woman in a pulled-up yellow dress making love on a desk in a well-lit office, as if the two were aware that they were being recorded in every detail of the act.

As one would predict, before long, the cruel characteristics of the internet saw to it that the act spread far and wide like a veld fire, people were having a field day cracking jokes all at the couple’s expense.

Meanwhile, as good or funny the clip may have seemed to others, one man is not impressed at all, he is not enjoying it, neither is he laughing: Zahed Sibda (48) is an unhappy man, for it has been claimed he’s the “leading man” in the film clip.

The man maintained that it’s not him captured in video having sex after hours in an office block – and went on to explain how the rumour has ruined his life as well as irreparably damaged his reputation.

Zahed, who is an investment banker, vehemently refuted the claims that he is the person seen having sex in the video clip. He said he’s been caused a great embarrassment by those who’ve been spreading the clip online and alleging that the silhouette in the glass window is his.

“Shock? Jeez, that doesn’t even begin to describe it. I’m disgusted and outraged. And no, I didn’t think it was funny, not for a moment,” Zahed told a local publication.

As if that was not embarrassing enough, to make matters worse, it is the fact that his 11-year-old daughter was the one to broke the unpleasant news to him implying that he – a married man – had been identified as one of the participants in the office sex romp.

Sadly, while he is making all efforts to explain that he definitely isn’t the guy in the video and no matter what he says, the gossip is still swirling and strangers keep staring at him, as if he were a wonder they are seeing for the first time.

This is not going down well with him.

“You can’t quantify the damage. The biggest shock is for my family.” His wife knows it wasn’t him, he said, but he is worried about his children, nieces and nephews.

“What must they think? The damage is irreparable – and all because two people couldn’t control themselves,” he said.

The prime question he is asking himself over and over is: Why me? Zahed told Drum magazine when the publication met him at his two-storey office in an impressive glass building in Sandton.

“That my name is now being associated with something like that – and at 48 years old! Eish . . .”

The steamy video surfaced on social media for the first time on 7 February.

A number of pedestrians and motorists had captured the incident from the street using their mobile phones and cameras.

What surprised many people is that the two lovemakers seemed to be very sure that they could be seen from outside, and not even the hooting from passing motorists deterred them.

Not long after, Zahed who is the managing director of Fieldstone Private Capital, which rents office space in the building, had his name linked to the video.

“I haven’t had a single good night’s sleep since this whole thing started. I’m exhausted, and I’m stressed. I lie awake thinking about it over and over . . . How could this happen?” He said.

A closer look at the video, couldn't explicitly incriminate Zahed who looked different from the guy in the video. The man in the clip had a bald head and the goatee but Zahed seemed shorter and more finely built than the randy Romeo in the sex clip.

Rubbing salt to the wound, social-media users continue asking him how he couldn’t have realised people could see in from outside. Or was it on purpose, a show?

“None of the above,” he said grimly. “Because it wasn’t me.”

His maintains his office routine. He parks his car underground, takes the lift to the second floor, and only leaves the building in the evening. He usually has his lunch at his desk, except when he has to see a client.

“I’d left the office for the day when that video was filmed. I went home around 6.40pm – long before the incident took place. You can ask anyone around here,” he said.

A number of people could confirm that he is not lying: he wasn’t there.

Zahed added that the video has even been causing waves overseas and that he’s had received messages from as far away as Switzerland, the UK and even Saudi Arabia.

“Each one says the same, ‘Zahed, we’re so sorry. We can’t believe something like that about you – but we know this thing will blow over.’

“But will it really? The damage has been done . . . I don’t know if anyone ever fully recovers from something like this. Things won’t ever truly be the same again. Because yes, there are those who know and believe you but those people who don’t know you will always be sceptical.

Zahed is trying his best not to drag his family into this unpleasant saga.

When asked, if he may have an idea as to who were the playres in the video clip, Zahed firmly answered that he had no idea who the people in the video could be. “But yes, I know which company rents that office space. This whole thing happened in their offices on the first floor of the building,” he said.

His lawyers sent the other company a letter asking them to come forward and clear his name.

“We’ve requested them to come forward and admit the whole thing happened in their offices, that I’m not the individual in the video and that they’ll take appropriate steps against the employees in the video.

“They’re keeping quiet now to protect their own interests – but by doing that, they’re doing incredible damage to my reputation. This isn’t ethical behaviour. Up until this point they’ve chosen to ignore my request,” he said.

Zahed is contemplating taking a legal course he said he had since contacted the police regarding the matter. Though he hasn't filed any lawsuit yet, he is considering suing several parties – mostly social-media users – for libel and damages.

“I’d just like to know what else needs to happen before the government puts in place laws prohibiting this kind of cyberbullying. How can we prevent innocent people from becoming victims?” He queried.

He added that the future is not certain.

“But, man, you must see all the requests I get on social media – all from women,” he said. “It’s disturbing.”

Zahed was not willing to be photographed because of the trauma matter has caused “for me, but even more for my family”.

“I don’t want to further expose them to any more trauma,” he said. “We never asked for this – we were dragged into it. It’s cruel.” 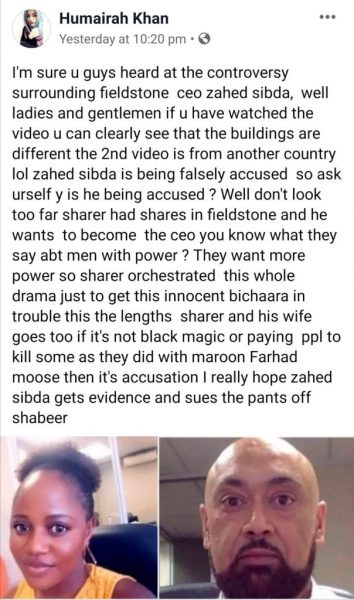