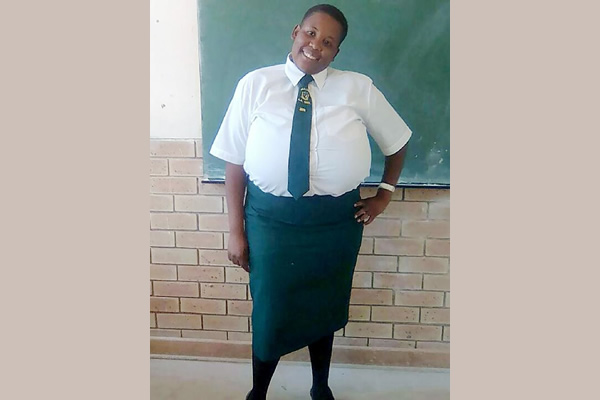 HER BREASTS feel like two heavy stones hanging around her neck.

It affects the way she lives, the way she thinks and is even threatening her future. Her big boobs are her daily burden. She is strongly believed to have South Africa's biggest breasts.

Everywhere she goes, she attracts attention . . . and it is never positive.

She said she has lost all her self-confidence and it becomes harder every day to keep a smile on her face.

Sibongile, a grade 12 pupil who wears a size 46DD bra, comes from a poor family.

Going to school has become a problem as other kids make fun of her and laugh when they see her coming down the school corridor.

She said her shoulders and back are always aching and it is difficult for her to sit or sleep.

The young woman said she suffers in silence.

“The women make fun of me. They tell me to give them half of my breasts,” she said.

“I am often called insulting names, including mmamatswele.” The word means big boobs.

Sibongile said she visited the National Hospital in Bloemfontein in 2015, hoping to get help. But she claims a doctor told her to lose weight. She has tried to stay slim but her breasts keep on growing.

She wants to be a chef one day but because she is always in pain her dream may not come true.

“I learned that breast reduction surgery is very expensive. I can’t even afford a bra which costs a couple of hundred rand.

“How will I be able to pay for such an operation?”

“And I can refer her to a plastic surgeon,” he said.

“Mondli Mvambi from the Free State Department of Health said they need the assessment of a medical doctor before the department can help her.

“We need medical proof that the patient’s life is in danger so we can help her.

“If it’s a life-threatening matter, the department will try by all means to help her,” he said.