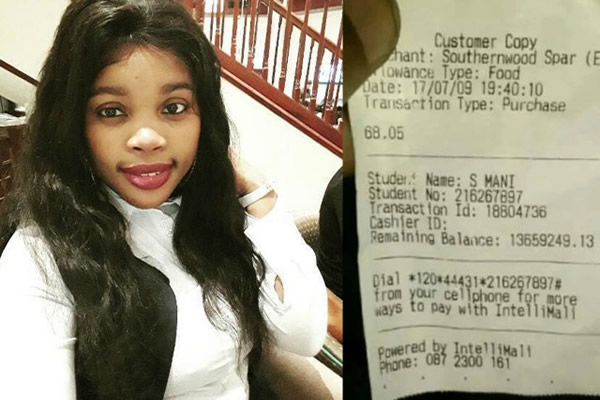 Sibongile Mani, 28, was arrested on Tuesday morning by the Serious Commercial Crimes unit after she was asked to hand herself over at the Hawks’ Eastern Cape provincial office in East London.

It is alleged that during June last year, Mani illegally received millions from NSFAS, spending just over R810 000 on personal items over a period of three months.

Three months after she was paid out, the anomaly was detected by the scheme.

The company tasked with the administration of NSFAS’s food and book allowances, IntelliMali, indicated at the time that they would lay charges.

From June 1 2017, when the money from a National Student Financial Aid Scheme (NSFAS) mistakenly landed in her account, Mani – a second-year accountancy student and a branch secretary of Pasma, the student wing of the PAC – spent an average of R11,000 a day.

By the time the error was detected, she had transformed herself and her friends into glamorous women, sporting expensive weaves, carrying iPhone 7 cellphones, slugging back shots of R700-a-bottle whisky and emulating their music star idols, especially Beyonce.

Mani’s political opponents – members of the SA Students Congress – grew suspicious after she underwent a transformation and let the cat out of the bag.

In August last year, Samkelo Mqhayi, deputy branch secretary of Sasco and SRC student support officer, said he was the one who outed Mani.

He said that suspicions grew after a receipt from Spar was leaked showing a balance of just over R13.6-million.

Mani was released on a warning and is expected to appear in court again on July 2.