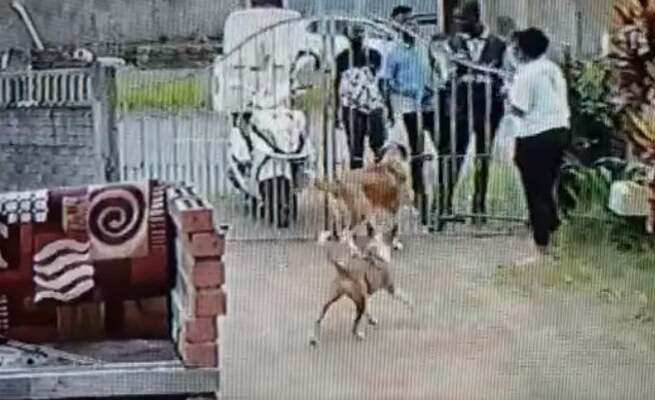 The men approach the delivery man from behind with a gun put to his back before the woman he was delivering pizza to backs away from the gate.

A man making a pizza delivery on a scooter in Montclair was robbed by men terrorising the Durban suburb, reports Southlands Sun.

According to Security Force, the robbers had initially attempted to accost a school child before moving on to rob the delivery man.

A Facebook post already doing the rounds online was shared by the Montclair Crime Eye, who warned residents to take extra caution.

“Response officers received an alert of a suspicious silver Polo Vivo hatchback that attempted to hold up a school child at gunpoint. While searching the area, a few minutes after the alert, the same suspects robbed a delivery man,” reads the post.

The footage is extracted off private surveillance installed on a residence facing Glanville Road. The video shows a woman with two dogs collecting the pizza from the delivery man at the gate before they are approached by two men who were seen walking casually.

The men approach the delivery man from behind with a gun put to his back before the woman he was delivering pizza to backs away from the gate. One of the men searches the scooter box while the other collects whatever is in the delivery man’s possession. The robbers then casually cross the street and jump into their getaway car.

The post further warns residents to be vigilant of this car.

Captain Derek Vijiam of Montclair SAPS confirmed that a case was opened but no arrests have been made.

“The delivery man was robbed of money and his cellphone. In his statement he was not sure if the car the robbers were in was a Toyota or Volkswagen as he was still suffering from shock,” said Vijiam.