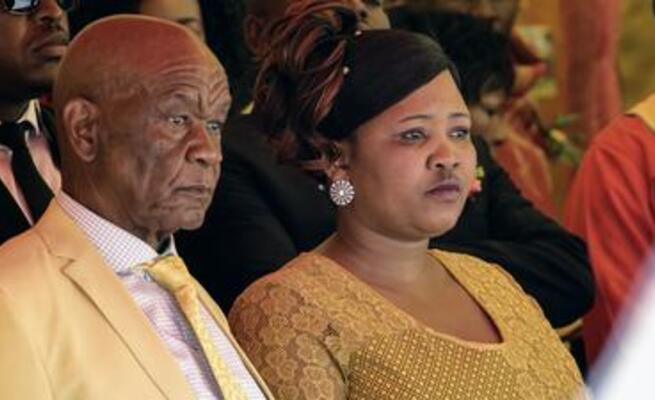 In the Old Testament’s Book of Judges, Delilah betrays Samson, the man who loves her, and orders a servant to rob him of his great strength by cutting off his hair while he sleeps.

History repeated itself in Lesotho this week when Prime Minister Tom Thabane, 80, said he would step down after revelations that his second wife, Maesaiah, was on the run after police issued a warrant for her arrest for the murder of his first wife.

The biblical parallel was not lost on Thabane’s daughter Nkoya Hlaele. “It’s a classic case of Samson and Delilah,” she told the Sunday Times in Maseru this week as the clamour for Thabane’s head became deafening.

Even politicians in the veteran politician’s own party, the All Basotho Convention (ABC), said Thabane’s position had become indefensible because of his failure to rein in an increasingly erratic first lady.

“She’s the cause of the house falling apart.

In the run-up to the 2017 elections, which Thabane contested after being forced out of power in a 2014 coup, there was a standoff between Maesaiah and Thabane’s then estranged wife, Lipolelo, 58.

Lipolelo refused to divorce Thabane and went to court to fight for her privileges as first lady.

She was shot dead on June 14 2017, two days before Thabane’s inauguration.

Police suspect Maesaiah was behind the killing and asked her to present herself for questioning on January 10. Instead, she went on the run, and six days later her husband — who had been asked by police why his cellphone was linked to the scene of Lipolelo’s murder — said he would step down.

Hlaele said Maesaiah’s disappearance told its own story. “If it were me, this would be a perfect opportunity to exonerate yourself,” she said, cautioning against holding on to the presumption of innocence so firmly “that it blinds us to the reality”.

Police, politicians and even the Thabane family believe the evidence linking Maesaiah to the murder is too strong to ignore, but she filed court papers asking that the warrant for her arrest for Lipolelo’s murder be set aside.

The police filed a counter-application, aiming to force Maesaiah to appear in court to show that she had authorised her lawyers to file papers, and for the court to be sure that she was in its jurisdiction.

The matter was due to be heard on Thursday but judge Tseliso Monapathi postponed the case to next week, saying: “It is a very

She’s the cause of the house falling apart Montoeli Masoetsa

By that point, police had already printed “wanted” posters emblazoned with Maesaiah’s picture, urging Basotho to come forward if they saw her. The police also suggested roping in international agencies to be on the lookout for her.

“She cannot be above the law. We would like to see her back home and go to the courts,” said government spokesperson Thesele Maseribane, a minister in Thabane’s government.

party said Maesaiah had been the architect of the prime minister’s downfall.

Ministers had been fired for questioning decisions Maesaiah made about affairs of the state, said Masoetsa. “You can be hired and fired by the first lady.”

ABC sources said even though Thabane led a coalition government, instructions about appointments came from the first lady. Hlaela said it was “amazing when you witness it with your two eyes”.

Maesaiah once had an argument with sports minister Mahali Phamotse, reportedly threatening to tear the minister apart for seeking Thabane’s attention, said Masoetsa. At a Maseru hospital, Maesaiah was accused of pulling a staff member by the hair and swearing.

“She has the audacity to go to the ministries with her husband and insult civil servants,” Masoetsa said, adding that Maesaiah had also been filmed berating government officials on the side of the road while her husband looked on.

Maesaiah’s arrest was the political fodder Thabane’s detractors needed to push him out of office. “If I was a politician I would also be calling for his resignation,” Hlaele said before her father said he would quit.

“I am sure if somebody was in office and they were doing this, my father would ask them to relinquish office.”