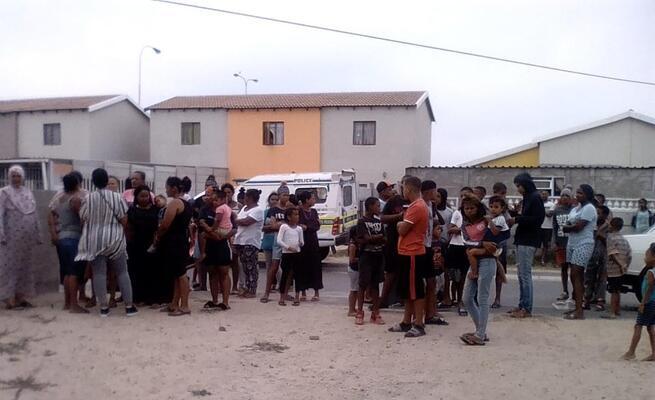 A Heideveld oupa
, who admitted to having sex with a 16-year-old girl, came under attack on Tuesday night as angry parents pelted his house with stones demanding he end the “relationship”.
But the 59-year old man insists he is not a paedophile and would marry the girl, who is 43 years younger than him, “right now”.

Shortly after 6pm, a large crowd of mothers and fathers gathered outside his home in Chapman’s Peak Road and demanded he let the girl go home to her mother or they would moer him.

Residents labelled the oupa “oorlams” and “ougat” and waited for him to come home from work before they pounced on him.

The man cannot be identified as the teen is a minor.

Residents labelled the oupa “oorlams” and “ougat” and waited for him to come home from work before they pounced on him.

The man cannot be identified as the teen is a minor.

The girl’s 39-year-old mother says the trouble started when the man offered her family a place to stay last year.

“They are in a relationship for three months,” the mom tells the Daily Voice.

“I was sukkeling and he offered us a place to live and then I caught him kissing her and holding her.

“I was shocked and I checked them. But then I moved out and she would still go there.

“I went to a social worker and they told me as she is 16 years old, she can consent legally to sex but they will send her away (to a home for troubled teens).

“I asked what is going to happen to him, but the police said they cannot charge him.

“I was mad because she is a child en hy het haar ’n groot vrou gemaak voor haar tyd.”

The worried mother says she was approached by a neighbour who asked her if she needed help.

“I said yes because I didn’t know what to do anymore. My daughter was like a big person and started backchatting me.

“The whole community came out and were skelling with him on Tuesday.

“They threw his one window in and told him to leave her or they are going to moer him.

“I am really happy for their help.”

Speaking to the Daily Voice on Tuesday night after being pushed around by angry men in his house, the scared oupa said he could have opened a case against them but decided not to: “They asked me to stop seeing her and I agreed. I will stop seeing her but that doesn’t change how I feel about her,” he said.

“I didn’t plan this, you don’t plan on falling in love. If it were possible, I would marry her right now. I would love to spend the rest of my life with her and I am serious.

“I am not a monster, I am not a paedophile, I am nothing of that kind.”

The oupa says the girl did her homework at his house and he fell in love with her.

He says they had a “wonderful relationship” and he would wait for her to grow up.

“I am forced to stop this relationship. I don’t want to put my life in danger.”

The girl admitted to having sex and also being in love with the oupa.

“He helps me, he gives to me and he loves me,” the shy girl tells the Daily Voice.

Acting station commander, Colonel Sanele Zama, says despite the huge age gap there is legally nothing wrong with the relationship.

“As she is 16 years old and is legally allowed to consent, we cannot open criminal charges against him,” he says.

“Manenberg police attended the scene on Tuesday night to calm the crowds and no injuries were reported.”