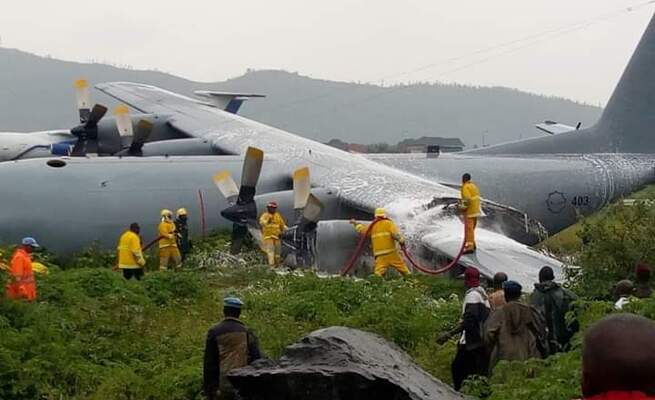 An SA Air Force transport aircraft crashed and caught fire during landing on Thursday at Goma airport in the eastern Democratic Republic of the Congo.

Images shared on social media showed damage to the left wing of the C-130BZ aircraft and there appeared to have been an engine fire.

According to DefenceWeb’s Darren Olivier this was the first serious accident involving the South African Air Force’s C-130BZs in more than 50 years of operations.

“A board of inquiry will now be convened and SAAF accident investigators will travel to Goma to determine the cause and prevent a recurrence.”

In an official statement the defence force confirmed that nobody had been injured.

“The left engine caught fire upon landing,” said the UN mission in the country, known by its French acronym MONUSCO, adding that its firefighters “intervened.”

“There were eight crew and 59 passengers. Everybody was evacuated safe and sound. Nobody suffered major injuries. The runway has reopened,” it said.

According to DefenceWeb, The South African military involvement with the DRC’s Force Intervention Brigade (FIB) will continue until at least the end of the current Monusco extension of 20 December this year.

“The UN mission’s FIB is the first ever peacekeeping unit given an offensive mandate as part of its tasking to protect civilians. It is a Southern African Development Community (SADC) brigade staffed by airmen, medics and soldiers from Malawi, South Africa and Tanzania.

They report that South Africa has been a component of the UN Monusco mission – the world body’s largest – since 2013 and the FIB is currently commanded by South African Brigadier General Patrick Dube.

“The infantry battalion currently in DR Congo is Zeerust, North West, headquartered 2 SAI with around 1 300 personnel in the central African country. 2 SAI replaced Phalaborwa-headquartered 7 SAI mid-last year and will end its peace mission deployment in mid-2020.”