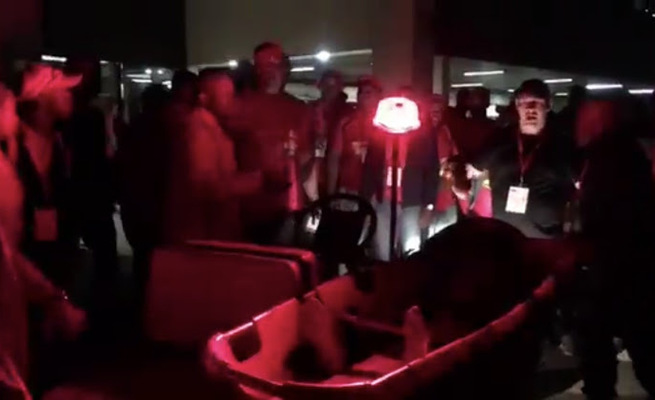 Four women delegates at the EFF elective conference had to be rushed hospital in the early hours of Sunday morning after being hit by pepper spray.

This came after delegates had a confrontation at the dining hall with the EFF para-military security unit, popularly known as the "Defenders of the Revolution (DOR)".

One of the women suffered a serious seizure after the pepper spray was used. She was the first to be taken away by ambulance.

The instigator of the use of pepper spray – a man whose face is always covered with a balaclava, but is known to EFF members as "The General" – was fired on the spot for the incident, according to party spokesperson Mbuyiseni Ndlozi.

"It's 'The General'. He gets excited, but he has been fired," said Ndlozi.

In the aftermath of the fracas, delegates blamed newly elected EFF secretary-general Marshall Dlamini for the incident.

Dlamini is the head of security in the EFF and, as such, oversees the DOR.

One delegate, who cannot be named because they're not authorised to speak to media, said: "It's Marshall Dlamini and his goons, the DOR. This is the kind of a person we have elected as SG [secretary-general]. He cannot be gifted on liking physical confrontations and being a leader, but we will see."

Ndlozi, however, said Dlamini could not be blamed as he only arrived at the scene after the incident. Instead, Ndlozi said, Dlamini should be commended for firing "The General" immediately.