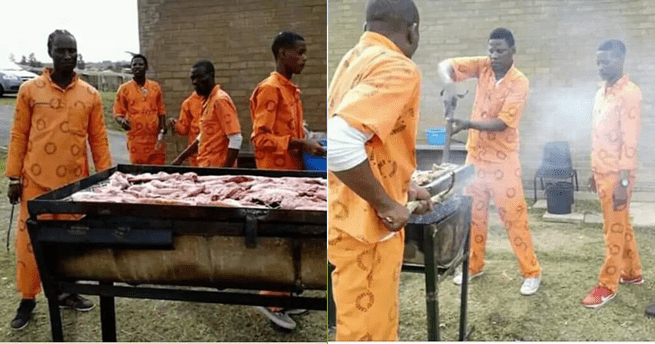 For many, prison is or should be a place where people are not only removed from society but are punished for all their wrong doings. So, when a picture of prisoners having a braai behind bars started trending on social media, there was an uproar of conflicting views about the matter.

Twitter user, Given Ngomeni posted pictures of prisoners, in their orange prison uniform, having stacking loads of meat on a braai stand alongside a prison warder in his own brown uniform. His question, “What's your take on this this issue of prisoners having a braai” sparked a debate that has lasted a couple of days on Twitter.

What's your take on this this issue of prisoners having a braai pic.twitter.com/dtiiCWwN1L

While some tweeps felt prisoners having a braai is not a bad idea, others were not having it:

“They have the right to eat.”

They have the right to eat.

Wait until someone rapes or kills your own…we will see if you will still think theres nothing wrong when his busy tossing&turning meat there??‍?? having a good time…not that am wishing such on u my point is..probably ain't close enough that's y you ain't feeling in a type of way.”

“Its completely interesting when the prisoners get to be rehabilitated yet the victims have to pick up the pieces and try to move on… or maybe i dont get the ideology behind it?!”

“If they did not cut up an inmate or a guard I see no problem with it!!”

If they did not cut up an inmate or a guard I see no problem with it!!

Setting the record straight about what was happening in the pictures, the Department of Correctional Services spokesperson, Mr Singabakho Nxumalo told DRUM:

“There are various activities which take place in correctional centres across the country where specific meals are prepared in line with what has been requested. When such meals are prepared, we utilise services of officials and inmates. In some instances, inmates will be involved in preparing braai meat should it be part of the meal requested.

Whereas, meals for inmates are prepared in the kitchens which are located inside the centres. Critical to note is that there is a meal plan for inmates as per the nutritional programme. Procurement for such meals is done separately from what is explained in the first stanza.”

“A regular meal determined according to the DCS current meal plan, which comprises seven cycles of twelve days each. The cycle meal plan is based on various types of food, as well as portion sizes indicated on the current Departmental ration scales.

As stipulated in the Departmental Procedure, there are neither special meals nor deviations allowed on the current Departmental ration scales. However, the food service may acquire permission to order raw rations on approval of the Head of Correctional Centre to cater for special occasions such as Christmas.”

Its completely interesting when the prisoners get to be rehabilitated yet the victims have to pick up the pieces and try to move on… or maybe i dont get the ideology behind it?!