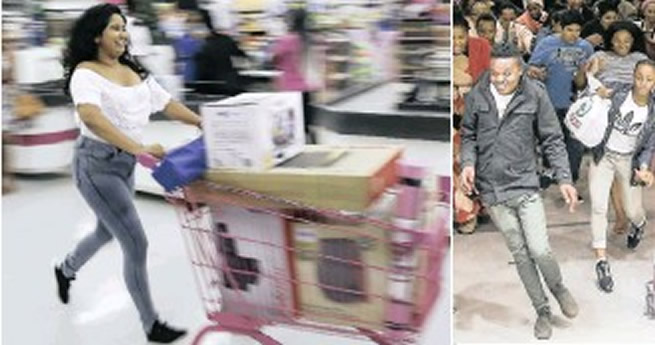 EVEN though South African consumers cannot afford to spend more money, they will when Black Friday fever sweeps across the retail industry this week.

Professor Carel van Aardt of Household Wealth Research Division at Unisa warned as consumers across the country prepared to benefit from “massive discounts” that a large percentage of households were living beyond their means and saving very little.

He said the recent Financial Wellness Index survey results showed that only about 25.5% of the population could be considered financially sound.

“However, the propensity to spend rather than to save is very high among consumers.

“Our findings revealed that consumers, although generally not having sufficient funds for very large expenditures during Black Friday will, nonetheless, be making use of the opportunity to obtain foodstuffs, household goods and smaller appliances at reduced prices.

“Finally, given that so many households are cash-constrained due to the stagnant economy and low levels of job creation, such households could make use of Black Friday to buy necessities and goods for the festive season at reduced prices,” he said.

While some major outlets confirmed they would start their specials as of Wednesday, Aardt reflected on the impact it would have on consumers.

Aardt said research had shown that small appliances, technology and household goods, clothing and shoes were the items which would most probably be bought, given the expenditure behaviour of consumers.

The National Credit Regulator (NCR) has warned against reckless spending.

Kedilatile Legodi, acting manager at the NCR, said to be smart and avoid unnecessary future financial troubles. Consumers are advised to first draw up a list, separating “needs” from “wants”, then look at their budget to check whether the available money is enough.

“If you did not plan and budget for Black Friday, you are cautioned not to use credit. This is because you will not be saving as credit costs more. When you buy on credit, you will be liable for related costs such as interest, monthly service fees, once-off initiation fees, credit life insurance and others”.

Legodi said consumers should never take for granted the value of planning and budgeting.

“By drawing up a list, you avoid falling into the trap of buying things you don’t need. By budgeting, you will be ensuring that your spending is within your means.

“Although Black Friday may indeed be providing consumers with an opportunity to buy goods on special and discounted prices, consumers still need to make use of this opportunity in a wise and responsible manner.”

She further cautioned consumers not to allow Black Friday to lead to a “blacklisting” and letting a one-day event lead to a life time struggle.

“Blacklisting” is an informal term used by many to refer to negative/ adverse listings and /or judgments at the credit bureaus.

The Durban Chamber of Commerce and Industry is hoping to benefit as scores of people are expected to participate in the shopping spree.

Palesa Phili, chief executive, said although Black Friday was not a long-term economic intervention, all businesses stood to capitalise if they applied good strategies and sound promotional plans.

She said the retail boost would benefit both the tourism and hospitality sectors due to increased numbers in shoppers across retail parks, business areas and shopping malls.

She said that the country was operating in a constrained economy and experiencing low levels of growth, but that this was an opportunity for local businesses to take advantage of Black Friday in a manner that would not jeopardise their long-term sustainability.

She added that a report provided by Statistics SA revealed a positive outcome with 2018 retail sales increasing by 2.8% compared with 2017 following Black Friday.