SENZO Meyiwa’s incomplete dream home is perched on a hill in Adams Mission, south of Durban. It is a painful reminder to neighbours of their loss following his death.

The development has become an eyesore, and people claim it harbours criminals who smoke drugs, drink alcohol and gamble.

Residents say the peace and tranquillity they enjoyed before its construction has been overtaken by fear.

They say the neglected five-bedroom house in the lush green hills has brought them only pain.

When the Sunday Tribune crossed the dirt road leading to Meyiwa’s house on Wednesday, most community members were going about their business, some hanging clothes and blankets on the washing line after a torrential downpour the night before.

Gogo Buyisile and her husband, Busani Makhanya, enjoyed the emerging sunshine by tending the soft soil where they plant their madumbes.

Their house faces the unfinished mansion. As soon as they were asked about the building, the beaming smiles on their wrinkled faces disappeared.

“We want the house to be demolished because it harbours criminals. We are scared of walking at night, we do not feel safe,” said Gogo. 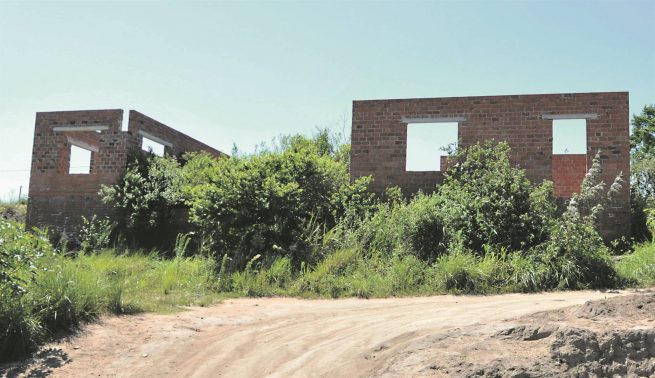 Mystery still surrounds the murder of the former Orlando Pirates captain in October 2014 when unknown gunmen killed him at the home of Kelly Khumalo, his girlfriend in Vosloorus, Gauteng.

Desperate for answers and getting none from the police, the family has turned to Afriforum to help them find the killer. Afriforum describes itself as an NPO which protects the rights of minorities, specifically Afrikaners.

Once inside Meyiwa’s property, one is greeted by cigarette stubs, empty cans of beer and used condoms. Makhanya said there was a group of teenagers who frequented the place during weekends and holidays.

He spoke of the pain he felt when Meyiwa’s father, Sam, visited the house before his death in July. “I saw the old man walking inside earlier this year. It was painful because it is where he thought he would enjoy his last days.

“It is also worrisome that his son’s killers are still enjoying freedom.

Sipho Shozi a headman of the Traditional Authority of the Makhanya clan, said neighbours, concerned about their safety, had lodged several complaints with the authority.

“The family understands that it is not our wish to either demolish or sell the property, but we do not approve of houses that are left unattended.”

Meyiwa’s cousin Siya denied any knowledge of the house and said questions should be directed to the football star’s older brother Sifiso. He could not be reached for comment.