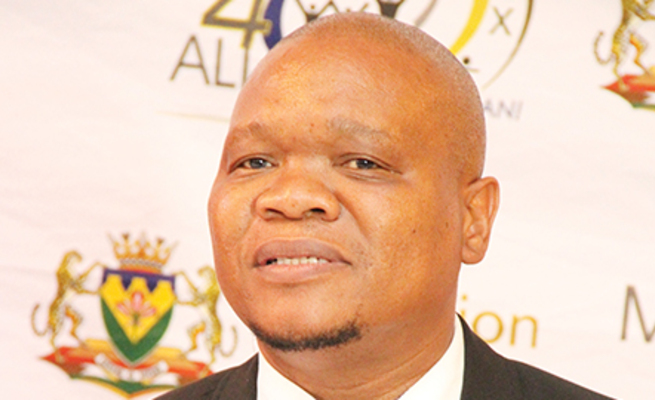 While Free State MEC for education Tate Makgoe is busy providing quality education for the province’s learners, his two-year-old twins are sitting at home after being removed from creche because of his alleged failure to pay school fees.

And soon the kids could be homeless because Makgoe’s baby mama, who is renting a townhouse in Kempton Park, failed to pay more than R4 000 in rent and R2 000 for water and electricity last month, and the landlord threatened to evict her if she did not pay before Friday.

Makgoe and the baby mama also obtained protection orders against each other from two separate courts last month after their papgeld battle reached a boiling point.

The heart-rending details were revealed by Makgoe’s baby mama during an interview with Sunday World at her rented apartment on Wednesday.

The baby mama, who cannot be named to protect the identity of the twins, said she removed the kids from the creche after its management pestered her to settle the October school fees.

She said she removed the kids out of embarrassment and because of Makgoe’s failure to settle the arrears.

The baby mama, whose kids were born out of an adulterous affair with the then-married Makgoe, said his friends had been paying the school fees on his behalf since she moved into the area three months ago.

“To my surprise, these socalled friends stopped paying after my contract with the company I was working for ended last month,” she said.

She said she couldn’t afford to pay school fees from the R6 000 papgeld he paid per month because the quantum did not even cover the kids’ monthly expenses. “Initially, I wanted R20 000 per month but he convinced me to accept the R6 000 and promised to find me a job and also pay other expenses via his friends and I was a fool to trust him. Now I’m drowning in a pool of debt.

“I sold my television to buy food for the kids, I still owe over R20 000 for the birth expenses and my overdraft is over R30 000 in arrears,” she said, shedding tears.

The baby mama said she did not know how to inform Makgoe of her and the kids’ calamitous living conditions because he obtained a protection order against her at the Bloemfontein Magistrate’s Court.

This after she arrived at his house unannounced to protest against his alleged failure to pay papgeld for the children on time.

The baby mama also alleged that she has been receiving strange calls from people who tell her that Pule, as Makgoe is known in political circles, will deal with her because she tried to destroy his political career.

“Ever since that, I make sure I lock myself and my kids inside my place from 5.30pm as I fear that some stranger could attack me,” reads the protection order.

Makgoe said he applied for the protection order because he didn’t want her to come to his house or his wife’s work place.

Makgoe refuted his baby mama’s claims that he was a deadbeat dad and said he was paying maintenance towards the upbringing of his kids every month as instructed by the court.

I’m drowning in a pool of debt. I sold my TV to buy food for the kids