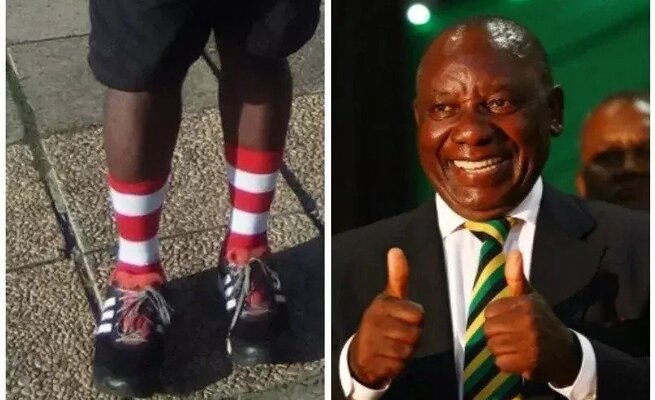 In many cases, it has become a norm that Heads of States, Presidents are not reachable, with security details at hand to bar anyone from getting up and close with the first gentleman. That is security protocol.

However, some Presidents are so close to those they lead, and at times associate with ordinary citizens.

The likes of former President Nelson Mandela was credited by some unconfirmed reports to have had been one of the few Presidents if not the only one who would mix and mingle with citizens freely, in the streets, without those heavily armed aides all over him, unlike some other leaders.

Meanwhile, local businessman, Sibusiso Ngwenya, better known as Skinny Sbu had such a rare encounter with President Cyril           Ramaphosa and he handed him a gift, much to the pleasure, interest of many celebrities and media practitioners.

The 27-year-old entrepreneur recently posted a video on social media, that quickly caught the attention of many, including celebrities and media personalities.

In the video, Sbu is holding a box with a pair of his signature socks, waiting in a passage area. The President of South Africa, Cyril Ramaphosa then emerges with a number of people, including his security aides, who allow Sbu have a very brief conversation with him. At close quarters with the President, Sbu quickly introduced his business and himself.

“I hope you will enjoy this pair and I hope you get to give it to your family. They’re by me, my name is Sbu, I’m skinny and I make socks.”

The president, though visibly in a rush, took time for a brief chat with Sbu, he asked the young man.

“You’re skinny?” as he jokingly examined him, to the pleasure of those around him, they laughed. Before quickly rushing off, the president thanked Sbu and shaked his hand.

Sbu captioned the post, that has since become the talk of town.

Be that as it may, Skinny Sbu hasn’t always been at the top of his game, he has had his own fair share of the ups and downs too.

In an interview with DRUM in 2018, he explained how in debt his business was, and that he suffered a form of depression.

Things were so bad, that he went missing for a while – his family and friends had no idea where he was.

He was later found at Dr SK Matseke Hospital in Diepkloof, Soweto.

“I have some form of depression. But in our communities, you get criticised for saying you are weak and under pressure. They tell you to snap out of it. But how do you snap out of something?” He said then.
Sbu could spent a lot of cash keeping up with the flashy lifestyles he saw celebs and businesspeople flaunting on social media.

“I had more access to money than before and I started misusing it. I started making uncalculated decisions and blew a lot on alcohol and going out,” he added.

And that quickly saw himself swimming in serious debts.

“We didn’t have clients and we had to close down the office,” he said.

The tough decision to close his Maboneng office, which employed seven people, touched him. “I chose my team based on skill, talent but also on their personal stories. When I let them go it felt like I’d failed them, like I’m not enough as an entrepreneur,” he explained.

Since then, he’s been trying to find his feet again, but it was not easy. “I’ve remembered the importance of living again. I’m more focused – I even have a rooftop garden where I plant lemons and tomatoes,” said Sbu.

And with his recent courageous move, and gifting the President with his brand label, hopes are high, he’ll be back on his feet in no time – and this time, stronger and wiser.