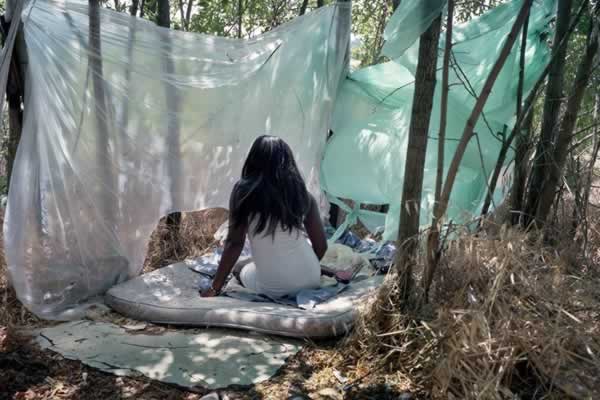 The body of an unidentified woman, believed to be a sex worker, has been found dumped in bushes in Blikkiesdorp, Cape Town, with her throat slit.

Community leaders and residents in the Temporary Relocation Area in Delft are shocked by the discovery in the bush, which was made behind K Block just after 7am on Saturday.

Witnesses say the young black woman’s neck had been cut and a bottle’s neck apparently shoved into her vagina. Monday, the Blikkiesdorp Committee was trying to identify the victim.

The Daily Voice was led through the stretch of bush to where the body was found, close to an informal rubbish dumping site. Committee member, Ashurah Buffkins, says they believe the woman had been raped, but cops have yet to confirm this.

“The lady who was found murdered here was an alleged prostitute,” she says.

We are trying to establish who she is, but so far, she is unidentified.

“The one person who saw the body here could not sleep for two nights because it was so bad, it’s very sad that women’s lives are being taken so brutally. We believe she was here visiting friends and this is a shock because Blikkiesdorp has become very quiet. People choose to stay in their homes and now this has happened. We rather keep our children safe because now it is a story of no one saw anything or heard anything.”

Since January, more than 60 people have been killed in acts of violence in Blikkiesdorp. The area became a TRA a decade ago to house former backyard dwellers on the City’s housing database.

Another committee member, Ashraf Buffkins, says the presence of the South African National Defence Force has not stopped the killings and he claims the community is being victimised and robbed, instead of being helped.

“The army and the police are not here for this. They come and interrupt us in our houses and steal people’s wallets.”

Police spokesperson, Lieutenant Colonel André Traut, confirmed the woman had been stabbed to death and that the circumstances surrounding her death are being investigated.

No arrests have been made yet.