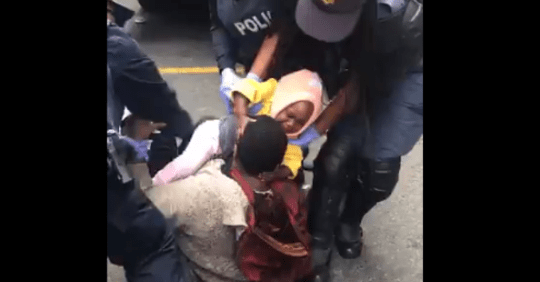 Scores of refugees and asylum seekers who were involved in clashes with police in central Cape Town on Wednesday have taken refuge at the Central Methodist Church in the city.

The church was packed in the early evening as men, women and children flooded in after being ousted from the Waldorf Arcade in St George’s Mall, outside the UN High Commissioner for Refugees (UNHCR), where they had staged a sit-in since October 9.

The group, from all across Africa, have been demanding that the SA government and the UNHCR help them leave the country in the face of recent xenophobic attacks.

Congolese national Patient Kazadi said xenophobia had left him with no choice but to flee the country.

“We’ve been here [outside the UNHCR] because of xenophobia in South Africa. We came to the UN to ask for our own rights. The government must send us to any other countries. They must take us out of South Africa,” he said.

Victor, a street vendor who fled Cameroon in search of a better life, was caught in the chaos even though he was not part of the sit-in group in the arcade.

“Their problem is my problem,” Victor said. “I’m better living in poverty and with peace of mind than in fear.”

Richard Scott, 41, who hails from the Eastern Cape but has lived in Cape Town for over 20 years, said he sympathised with the protesters. “I’m not happy with what is happening. The government must let them go… it has the money.”

Scott added that that gesture might enrage South Africans, who have been promised a better life for a long time.

The Scalabrini Centre for refugees said the protesters did not necessarily represent the wider refugee and migrant community in South Africa.

The centre told Sowetan sister publication TimesLIVE on Wednesday that police had provided “ample warning” for the crowd to disperse prior to launching the eviction.